Right outside the front entrance to St. Peter's Basilica is a gem of a shop, the official store of Libreria Editrice Vaticana, the Vatican publishing house. Here one can find all sorts of fascinating books that are not available elsewhere. For example, the original Latin 1994 edition of De Benedictionibus [Book of Blessings], which is the Novus Ordo vrsion of the Rituale Romanum; the 2004 edition of the Enchiridion Indulgentiarum, the Manual of Indulgences; and the 2008 edition of the Caerimoniale Episcoporum, the Ceremonial of Bishops, which details how episcopal liturgies are to be carried out. Even the often (and currently) out-of-print 2002 Novus Ordo Latin Altar Missal is there on the shelf. 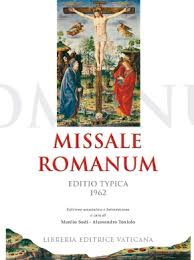 But what does one find on the first shelf inside the front door, in the characteristic position of best-sellers, with many rows of copies of each book? The Vatican's recent reprint of the 1962 Tridentine Altar Missal, the Missale Romanum, plus the accompanying reprint of the 1952 [sic] Rituale Romanum, the book of blessings and sacraments. Interestingly, these two books are also featured on the home page of the Vatican Bookstore's Internet sales agent, www.paxbook.com. These hardcover books are called "study editions"; the Altar Missal is a little small to be used regularly, but might come in handy for a priest's traveling kit.

In Canada, there's a Tim Horton's every few blocks. In the United States ... check that, in many Western countries ... Starbucks has stores seemingly everywhere. In Rome, church supply stores dominate the landscape. And we're not talking about souvenir shops, but rather establishments where one can purchase vestments, chalices, monstrances, thuribles, and the like. Some are not quite what you'd expect: Gammarelli's, the "Pope's tailor" under John Paul II, is little more than a hole in the wall with rolls of fabric on the shelf. Other stores' inventory leans toward the modern. But in a sign of the times, every store we saw featured in its front window at least one Roman (fiddleback) chasuble, a sight unimaginable even a decade ago.

Who had the best array of goods for the Tridentine Mass? Euroclero, a store located adjacent to St. Peter's Square and directly across the street from the offices of the Ecclesia Dei Commission. What a coincidence.

The Vatican is not immune to liturgical irregularities. Your correspondent happened upon a Mass at St. Peter's Basilica at which the Our Father was followed by Simon & Garfunkel's Sounds of Silence sung in a foreign tongue. And speaking of silence, in the crypts under St. Peter's, there is a continually running recording in multiple languages imploring people to be silent in this sacred place. Sounds of silence, indeed.

Graffiti has become a major problem in Rome, covering building walls and subway trains everywhere. Traffic has always been aggressive in Rome, but with every tenth car nowadays a Smart Car, and motorbikes weaving in and out of the other cars, there are accidents waiting to happen. One has to admire the skill of tour bus drivers, who manage to defy the laws of physics and navigate the tight driving conditions and swarms of smaller vehicles with nary a dented bumper.

Last week we spoke of the Fraternity of St. Peter's new parish in Rome, Santissima Trinita dei Pellegrini. This full-fledged personal parish took the place of the FSSP's former home, the chapel-scale San Gregorio dei Muratori. In additional to being much smaller, San Gregorio was located down an alley, not easy to find. Clearly Ss. Trinita is an upgrade. The parish has a new web site: http://roma.fssp.it/

Masses in the Extraordinary Form are also offered by priests of the Institute of Christ the King on Sundays at 10:00 AM at the church of Gesu e Maria on the Via Corso. Unusual for the Institute, this parish is shared with a Novus Ordo Community.

Masses in the Extraordinary Form may now be celebrated at the side altars of St. Peter's Basilica. Visiting priests need only inform the sacristan as to their missal preference when arriving, although it would be prudent to bring as many of one's own supplies as possible.

The Grass Is Not Always Greener on the Other Side

Perhaps the most important lesson learned is that we here in Detroit and Windsor enjoy music programs more impressive on a weekly basis than what Rome was able to deliver on a special occasion. Our historic churches are clean and (at least visually) well-maintained. Only the four major Roman basilicas truly outshine our local churches, yet they are not sites where the Extraordinary Form is celebrated on a regular basis with full ceremonial. We may be in the trenches here in the North American Midwest, but we are faithfully following Holy Mother Church's prescriptions to celebrate the Traditional Holy Sacrifice of the Mass with the greatest devotion that our means allow.