Fr. Perrone on the effects of fasting: the good, the bad, and the ugly 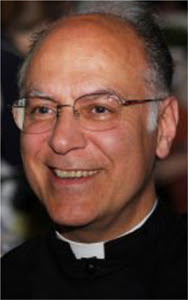 We missed celebrating the feastday of Our Lady of Lourdes on Thursday since it was only a commemoration, falling as it did after the beginning of Lent. On account of the Holy Mary’s gracious apparition in France we have the honor of possessing our Lourdes Grotto, the building of which was an inspiration of our first pastor, Father Amandus Vandendriesche. I commend all our parishioners to the care of The Immaculate Conception, for the good of their souls and the health of their bodies.

Lent is much on our minds–even unto being forced to concentrate on it if we are doing penitential acts. You know how highly I recommend the practice of fasting for Lent, and I hope that those of you who are able will take up and persevere in this traditional form of penance and mortification.

The inspiration for the Christian fast comes not from Judaism but from our Lord Himself. I recall reading the story of a priest held in a concentration camp during the Second World War. He told of how his fellow prisoners behaved when they had been deprived of sufficient food while made to work like slaves. Men ordinarily rational and civil to one another become just short of beasts when starved, even to the point of being willing to kill another man for a morsel of bread. I mention this because of the fasting of Jesus in the desert for the forty days (our period of Lent). He was not only hungry, but ravenous, intensely hungry. So, when the devil proposed to Him to turn stones into bread, one has to imagine the power of that suggestion to His imagination. Our Lord refused. An iron will surely, but more, He was redeeming sinners by His denial to succumb to the blandishments  of the devil. He was compensating for our indulgent self-willfulness, an heroic act which we should not be too ready to attribute to His divine power only. Our Lord felt deeply in His human body the aching, nearly deadly, desire for food and drink.

Fasting has the advantage of making us tough willed people. I read more recently about Cardinal Sarah of the Holy See where he is head of the Congregation for Divine Worship. In an interview he admitted that he goes on a yearly retreat in which he eats and drinks nothing for three full days. I doubt he told that to be admired by his listeners. He was rather trying to relate to them the secret of his spiritual strength. He has been a very courageous man, defending the teachings and traditions of the Church, sometimes standing nearly alone. How does a man come to have such force of his convictions? The fasting is the answer. Repeatedly denying the craving of the flesh for the satisfaction, the comfort, of eating has the double effect of dulling the hankering appetites of the flesh and of sharpening the edge of the spirit. We all are weak and easy prey for the devil unless we do penances to make the soul dominate over the flesh. If there were an easier method, I’d be happy to share it with you. From the apostles, following the example of Christ, down to our time there is the tradition of taking on the discipline of fasting–a practice of indispensable spiritual value. ‘Nough said.

Today, I note, is Valentine’s Day–Saint Valentine’s day. As with so many other good things that the Church brought into our culture, this has been thoroughly secularized, and even debased as a pagan celebration of erotic love. The difference between charity–a Christian, theological virtue–and romantic love is,  believe it or not, often confused in the minds of young people who have never had a religious upbringing. I can testify to that myself in having instructed young converts to the faith who were astonished to learn that sex and love were not interchangeable terms–so successful has been the entire depreciation of Christian culture and the triumph of ignorance of the faith. The real man Valentine died for Christ’s sake: a martyr. Certainly, wish one another a Happy Valentine’s Day today–meaning a day filled with the love of Christ.

A decrease in mortification ineluctably leads to an increase in effeminacy

ABS made-up that iron law and it got him to thinking about Mahometans and Ramadan because the reverse of that Iron Law means that an increase in mortification leads to an increase in masculinity.

Because they Fast and Abstain (mortification) Mahometan men are more likely than not to have an increase in masculine attributes/passions and because Mahomertan Immigration is rape culture, countries accepting them as immigrants can expect an increase of their native non-Mahometans, especially Christian women, to be raped during Ramadan.


O, and because the vast majority of Mahometan Doctors are men, will their mortification result in greater or fewer numbers of surgical mistakes made during clitorectomies?