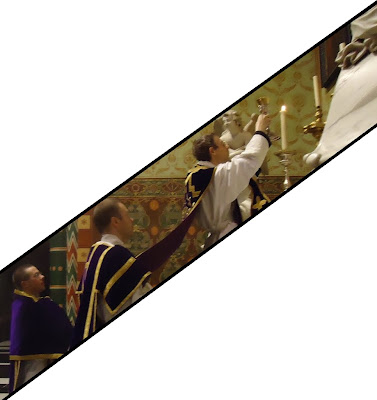 The deciding issue concerning the position of the priest at the altar is, as we have said, the nature of the Mass as a sacrificial offering. The person who is doing the offering is facing the one who is receiving the offering; thus, he stands before the altar, positioned ad Dominum, facing the Lord.

If, nowadays, the aim is to emphasize the aspect of the communal meal during the "Eucharistic Feast" by celebrating versus populum, this aim is not being met, at least not in the way some might have hoped. The new arrangement has the "meal leader" positioned at the table, by himself. The other "meal participants" are situated in the nave, or in the "auditorium," not directly connected to the "meal table." ...

The focus must forever be on God, not man. This has always meant that everyone turn towards Him in prayer, rather than that the priest face the people. From this insight, we must draw the necessary conclusion and admit that the celebration versus populum is, in fact, an error. In the final analysis, celebration versus populum is a turning towards man, and away from God.

Acknowledgements: This post, with its added emphases, was taken from ". . . propterea exaltabit caput." (Rorate Caeli, August 24, 2011). Image source: Mysterium Fidei - announcing the monthly Mass at the Basilica of the Most Precious Blood in Bruges. Msgr. Klaus Gamber's book is available in English translation under the title, The Reform of the Roman Liturgy.

A French translation carries a laudatory Foreword by the former Cardinal Ratzinger.

A rather warlike and triumphal context lurks behind the Latin quote.

Excellent related piece that provides a tutorial much needed on the parish level, where counter-emphases have long prevailed:

Psalm 108 is even better. The Scottish Covenanter congregations traditionally chanted the Psalms a capella. This Psalm is in their Sunday Psalm book, though it has been taken out of most contemporary Catholic Liturgy of the Hours prayer books. C.S. Lewis saw them as egregious transgressions of the moral law of charity and thought they didn't belong among divinely inspired Scripture. Perhaps it's a perverse streak in me, though my verdict on my own motives is still out, but I do think they very much belong. Even the Apostle John has been faulted for his attitude toward the Jews who crucified our Lord. But who's to say that loving your enemies isn't compatible with praying for their early demise? It's part of experience, minimally. Besides -- back to my attitude -- it's a bit like loving the smell of napalm in the morning, along with the sizzle of Papal Bulls for breakfast.