Some of you may remember that we recently mentioned (in a post here in Musings on August 17, 2011) that Jeffrey Tucker and Arlene Oost-Zinner of the Church Music Association of America (CMAA) would be visiting -- and singing with -- the choir at Windsor's Assumption Church on Sunday, August 28th at 2:00pm.

We were there for the occasion, and it was one of those moments that reminded me once more of how glad I am to find myself looking forward to Sundays now that we're here in the Metro Detroit area. Before moving here, we had come to the point of dreading Sunday Mass, because we never knew what to expect -- or should I say: we always knew what to expect -- namely innumerable programmatic distractions. In Martin Mosebach's words, we would go to Mass hoping to meet God and come away theater critics. In any case, last Sunday at Assumption-Windsor everything was perfect. It was beautiful, like one of those days when the weather is so good that you are just happy to be alive and breathing the cool air and soaking in the sunshine. Yes, Sunday Mass can be Extraordinary!

So now, not even a week later, we have the following post from Jeffrey A. Tucker: "Vigor, Energy, Freshness in the Extraordinary Form" (The Chant Café, August 30, 2011): 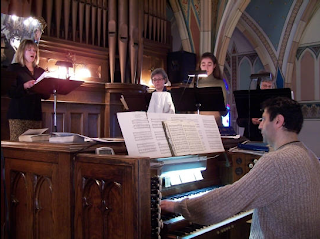 Wassim Sarweh must be one of the most brilliantly innovative yet underrated organists and choirmasters in the English-speaking world. I say that because I just heard him play and his choir sing at the Church of the Assumption Latin Mass in Windsor, Ontario. If you have not been, it is worth a trip. It will redefine your understanding of the aesthetic potential of the extraordinary form. It is also a wonderful experience to join this community of happy and liturgically enlightened Catholics in this beautiful parish.

Wassim's singers are all first rate, and his approach to playing the organ was like nothing I've heard before in this context. Forget nostalgia and dated sentimentalism This is something completed different. The celebrant's voice is clear and his Latin diction is perfect. The singing is as precise as it is effervescent. If you attend on the right day, you can even hear the Gradual chant sung in organum with middle eastern musical accents.

Many people know that I'm no fan of accompanied chant, but Wassim took an approach that was enough to make me a new believer at least as regards the people's chants. He didn't use organ on the Mass propers -- all sung from the Graduale Romanum - but rather on the ordinary of the Mass and the credo in particular, since the rest of the Mass ordinary was sung according to a setting by Orlando di Lasso.

When I first saw Credo III listed, my thought was: too bad that this parish uses this too familiar setting as a fallback. Accompaniment surely can't help. I was completely wrong. Wassim took off following the celebrant's intonation. The speed was vigorous and the text very clear. The harmonies he chose were not like anything I had heard. There unusual modal shifts. There were dramatic volume changes and interesting articulations that heavily informed the singing. There was real word painting going on. The drama ebbed and flowed throughout. As we approached the end, the intensity grew and grew, and my heart began to race. As we finished, I was left with a wild feeling of exuberance, and I wanted to look around and shout: don't we all share a fantastic faith?! I know it sounds silly but music is capable of inspiring such feelings. I never imagined that Credo III could do that.

I asked Wassim where he found such an amazing version. I should have known: he wrote it himself. It is not published. It should be. It should also be on youtube. It would be a revelation for many.

... It was a great privilege for me and for Arlene Oost-Zinner to sing with the choir on the Sunday when we happened to be there following a parish workshop in Lansing, Michigan. I can't imagine what it would be like to have access to such a glorious liturgical event week after week. If you live anywhere near this parish, it is worth a drive just to see what is possible. More than any "old Mass" I've attended, this convinced me that this really could be the Mass of the future.

Yep. That's just about it. I would just add that Wassim Sarweh doubles as our organist and choirmaster at St. Josaphat in downtown Detroit too. He's far too humble to admit it, but he's the genuine article, a regular Meistro.
Posted by Pertinacious Papist at 10:24 PM
Email ThisBlogThis!Share to TwitterShare to FacebookShare to Pinterest
Labels: Detroit, Liturgy, music