The politics of the Council 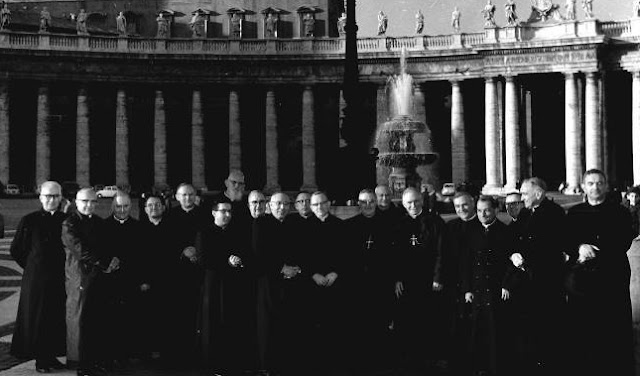 In this small snippet from Dr. Roberto de Mattei's fascinating history of the Council, the author tries to answer some perplexing questions. Was the Second Vatican Council dominated by a "progressive" majority? Or were the "progressives" also in the minority? And, if so, why did they turn out to be the most influential minority?

It was a well-orchestrated hijacking. The more you study the history, the clearer it is.

"Thomist" and "anti-thomist" is clearly insufficient labelling. There are many varieties of thomism, and many of them are bogus. To measure their bogusness, one might do worse than determine their age. Most of the modern varieties can hardly be called Christian without strenuous qualification. Transcendental Thomists (Kantian Thomists, one might more truthfully say), existential Thomists -- probably a few Marxist and Nietzschean Thomists crawling out of the walls here and there -- can Nihilistic Thomism be far behind? De Lubac and Rahner claimed to be thomists and few stood to challenge them on it, which should tell you a great deal about the callowness of the great V2 majority. No term is in greater need of reclamation than thomism, in both philosophy and theology.

"Hijacking" is indeed the word.