On Saturday, October 18, 2008, hundreds of people from around the world converged on Rome to celebrate two landmark events: The 20th Anniversary of Ecclesia Dei Adflicta, the first Papal Motu Proprio granting (limited) freedom to, and indeed encouraging bishops to permit, priests to celebrate the Tridentine Mass. Coinciding with this was the 20th Anniversary of the founding of the Priestly Fraternity of St. Peter ("FSSP"), the first papally-chartered community of priests to celebrate exclusively the Traditional Mass and sacraments.

Why celebrate a Motu Proprio that has (recently) been superceded? It was a landmark legislation that led to the creation of countless Tridentine Mass Communities, priestly societies, and religious orders devoted to the classic liturgy. We would not have Summorum Pontificum without Ecclesia Dei going before it. 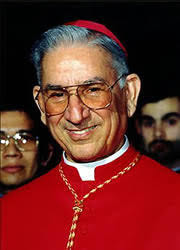 The event began a week earlier, with an organized tour of various sacred places in Italy. The main weekend in Rome included numerous liturgical events based at the FFSP's new parish in Rome, Santissima Trinita dei Pellegrini (Most Holy Trinity of the Pilgrims). Highlights included a Pontifical Solemn Mass on Saturday celebrated by Dario Cardinal Castrillon Hoyos, the President of the pontifical Commission Ecclesia Dei. Cardinal Castrillon is our Holy Father's top official for matters concerning the Tridentine Mass. The church was standing-room only, which always makes for an inspiring environment, especially for the singing of the well-known Mass parts such as Credo III. Other events were divided up according to language groups: On Sunday, two solemn High Masses were celebrated, one for English-speaking pilgrims celebrated by Fr. John Berg, FSSP Superior.

As often happens at such events, familiar faces pop up. Widsor's Brother John Berchmanns, presently studying for the priesthood in Rome, attended in choir along with fellow members of the Canons Regular of the New Jerusalem.

On Sunday evening, a dinner was held for English-speaking pilgrims. The crowd included several noteworthy individuals, including Fr. Arnaud Devillers, who formerly served as North American Superior, and later General Superior, of the Fraternity; and Carl Horst, co-organizer of the San Diego Tridentine Mass, one of the first Traditional Mass Communities in North America.

First-time visitors to Rome are often amazed by the plethora of churches. Every block or two is another church. Many are open for visitation during mornings and late afternoons. The four main Basilicas, St. Peter's, St. Mary Major, St. John Lateran, and St. Paul Outisde the Walls, are landmarks that must be visited, with the last perhaps the most beautiful of all.

Ad orientem celebration of Holy Mass in both forms abounds. Many churches use their side altars, and some do not have freestanding altars at all. The ancient architecture of the chruches in central Rome leads to a seriousness about the liturgy that makes the occasional modern accoutrement in a church look out of place.

Where It All Happens

We could not consider our visit to Rome complete without stopping by the sanctum sanctorum, the Ground Zero of the Tridentine Mass scene, the Palazzo del Sant'Uffizio, home of the office of the pontifical Commission Ecclesia Dei. With paparazzi waiting outside to photograph any famous people who might be leaving the building, and security on entry to the building reminiscent of Get Smart, you know some important things must be happening inside these walls. This is where decisions are made concerning the Sacred Liturgy that concern readers of this column. Yes, the Holy Father has to sign off on all major issues, but the day-to-day decisions are left in the hands of a small staff that is equally concerned with maintaining harmony in the Church as it is with higher-profile issues such as negotiations with the SSPX.

Virtually all of the English correspondence handled by this office passes by the desk of Msgr. Arthur Caulkins, who graciously spent part of his day with your correspondent. A noted Mariologist in addition to his work at the Commission, Msgr. Calkins has always been concerned about us here in Windsor and Detroit. He continues to provide wise guidance on a spectrum of issues affecting us.

Speaking of the Fraternity of St. Peter, mark your calendars: On Sunday, November 23 at 2:00 PM at Windsor's Assumption Church, co-founder of the Fraternity of Guadalupe Seminary, Fr. Josef Bisig will be celebrant of a Solemn High Mass commemorating the 17th Anniversary of the Windsor Tridentine Mass. Deacon Richard Bloomfield will be Deacon, and Fr. Peter Hrysyk will be Subdeacon. A reception will follow in the Social Hall after the Mass.

Fr. Bisig will be making his fourth visit to our region. Priest, scholar, and entrepreneur of sorts, Fr. Bisig has done more to advance the cause of the Tridentine Latin Mass than most anyone alive today.

[This issue of Tridentine Community News is published by kind permission of the author from the November 2, 2008, Sunday bulletin insert for St. Josaphat Catholic Church, Detroit, Michigan. Hat tip to A.B.]
Posted by Pertinacious Papist at 9:43 AM
Email ThisBlogThis!Share to TwitterShare to FacebookShare to Pinterest
Labels: Latin Mass, Liturgy