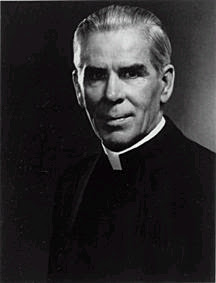 FULTON (JOHN) SHEEN was born on 8 May, 1895, in El Paso, Illinois. Ordained on 20 September, 1919, Sheen became one of the most popular preachers of the twentieth century. In 1930 he began the Catholic Hour broadcasts on NBC radio, which ran for twenty-two years. He spoke for the first religious service ever telecast in 1940. In 1950, the bishops of the United States invited Sheen to become National Director of the Society for the Propagation of the Faith, where he served for sixteen years. Pope Pius XII appointed him bishop in 1951 (auxiliary in New York).

From 1951 until 1957, he hosted the highly acclaimed television series, "Life is Worth Living," for which he won an Emmy in 1953. He wrote over sixty books and dozens of articles. Two books, Peace of Soul

[1949] and Life Is Worth Living: First and Second Series

[1953] became national best sellers. In 1962, Pope John XXIII appointed him to the Vatican Council II Commission on the Missions. In 1966, Pope Paul VI appointed Sheen Bishop of Rochester, New York, where he served until his retirement in 1969 at which point he was created (Titular) Archbishop of Newport (Wales).

Archbishop Sheen died at his home in New York City on 9 December, 1979 and he is buried in the crypt at St. Patrick's Cathedral. His cause was formally opened in 2002 and he has been declared Servus Dei.

In England, Archbishop Sheen is associated with St. Edmund's College, Ware, where he taught; St. Patrick's Church, Soho Square, London, where he supplied and preached over many summers; and Tyburn Convent whose apostolate of Eucharistic Adoration he championed. Every day of his priesthood (1919 - 1979) Fulton Sheen made a holy hour. Please pray for his beatification. You could start by making a holy hour!

Heavenly Father, source of all good and all holiness, You reward those who love and serve You as faithful sons and daughters. If it pleases You, I ask You to glorify Your servant, Archbishop Fulton Sheen. He touched countless lives by his ministry of evangelization, especially through the media. His clear and courageous teachings about Jesus and the truths of the Catholic Church seemed to possess a special power of the Holy Spirit that strengthened the faithful and inspired many converts to embrace the Faith. He supported the needs of missionaries all over the world through his work in the National Office for the Propagation of the Faith. He also labored zealously for the renewal of the Priesthood by preaching retreats to his brother priests and by encouraging them with the good example of his daily Eucharistic Holy Hour. His deep personal love of Our Lady moved many others to go to Jesus through His Mother.

Heavenly Father, if it be according to Your Divine Will, I ask You to move Your Church to glorify Your faithful servant, Archbishop Fulton Sheen. I ask this prayer confidently in Jesus' Name. Amen.

For information on membership in the Archbishop Fulton Sheen Foundation, or to share any personal knowledge of the Archbishop (letters, photos, life-experiences, or to report any spiritual or physical favors granted in his name), please write: