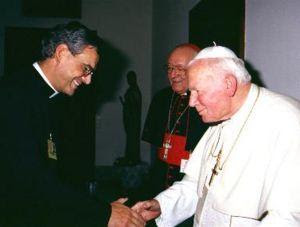 Please join us on Sunday, November 23 at 2:00 PM for a very special celebration commemorating the 17th Anniversary of the Diocese of London, Ontario's weekly Traditional Latin Mass in Windsor. The Holy Sacrifice of the Mass according to the Tridentine "Extraordinary" Form will be offered by one of the most prominent figures in the international Latin Mass movement, Fr. Josef Bisig, FSSP. A reception for Fr. Bisig will follow Holy Mass in the Parish Hall.

In 1988, Fr. Bisig led a group of twelve priests to form the Priestly Fraternity of St. Peter, a society of priests devoted to celebrating the Traditional Latin "Tridentine" Rites of Holy Mother Church. The Fraternity is one of the very few priestly orders created by papal charter: Our current Holy Father, Pope Benedict XVI, then Cardinal Joseph Ratzinger, worked directly with Fr. Bisig to create an international priestly society to serve members of the faithful who love the Traditional Rites of the Church. In just 20 years, the Fraternity has enjoyed remarkable vocations growth: There are currently over 170 priests and 120 seminarians in the Fraternity; one seminary in Wigratzbad, Germany; another seminary near Lincoln, Nebraska; and a house of formation in Australia. There are many more applications than available space at the FSSP's seminaries. Fraternity priests now serve dioceses worldwide. Today, Fr. Bisig is Rector of the FSSP's Our Lady of Guadalupe Seminary in Nebraska and travels the world as an expert on traditional liturgy.

Assumption Church is located adjacent to the Ambassador Bridge, on the east side of the bridge, on the campus of the University of Windsor.