Which catastrophe? Whose responsibility? 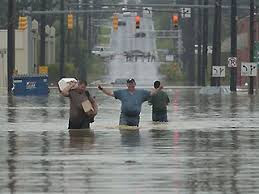 "Where are all of the Hollywood celebrities holding telethons asking for help in restoring Iowa and helping the folks affected by the floods?

"Where is all the media asking the tough questions about why the federal government hasn't solved the problem? Asking where the FEMA trucks and trailers are?

"Why isn't the Federal Government relocating Iowa people to free hotels in Chicago?

"When will Spike Lee say that the Federal Government blew up the levees that failed in Des Moines? Where are Sean Penn and the Dixie Chicks?

"Where are all the looters?

"Where is the hysterical 24/7 media coverage complete with reports of cannibalism and shooting at helicopters?

"Where are the people declaring that George Bush hates rural people? How come in two weeks you will never hear about the Iowa flooding ever again?