Joseph Pearce's race with the Devil

Joseph Pearce, author of Literary Converts: Spiritual Inspiration in an Age of Unbelief

(San Francisco: Ignatius Press, 2000), and many fine biographies of English Catholics (like G.K. Chesterton, Hilaire Belloc, and J.R.R. Tolkien), as well as others whose relationship to Catholicism were more ambiguous (such as Oscar Wilde and C.S. Lewis), has, as he would be the first to tell us, a ... shall we say ... checkered past. In "Race With the Devil: A Journey from the Hell of Hate to the Well of Mercy" (in Journeys Home column of the The Coming Home Network International's July 2008 Newsletter), Pearce relates his early relationships with anti-Catholic terrorist cells, the Ulster Volunteer Force and Ulster Defense Association, and petrol bomb attacks in which Catholic-owned shops were looted and destroyed in Derry.

I used to read many more of these Journeys Home stories than I have in recent years, perhaps because of the tyranny of the seemingly more urgent, but I've grown to respect Pearce after making his acquaintance through his writing over the past decade, and I was curious about his background. I had read in one of his books that he had been involved on the anti-Catholic side of the Ulster troubles before his conversion, but I hadn't realized how deeply he was involved.

"A sound atheist can not be too careful of the books that he reads." So said C.S. Lewis in his autobiographical apologia, Surprised by Joy

. These words continue to resonate across the abyss of years that separates me from the abysmal bitterness of my past. What is true of the atheist is as true of the racist. Looking back into the piteous pits of the hell of hatred that consumed my youth, I can see the role that great Christian writers played in lighting my path out of the darkened depths. Eventually, with their light to guide me, I stumbled out into the dazzling brilliance of Christian day.

I think it may have been in the Introduction to Literary Converts (I cannot lay my hands on our copy at the moment and can't be sure), that Pearce offers a lucidly succinct apologia for the direction he chose to go in his research and writing. As I recall, he didn't think straightforward theological apologetics would be his strongest suit, but that the most effective means of engaging the contemporary culture and its hiatus of meaning and purpose would be through the medium of the great artifacts of Catholic literary culture.

But I'm jumping ahead of myself. Pearce writes:

I grew up in a relatively poor neighborhood in London's East End at a time when large-scale immigration was causing major demographic changes.... racial tensions were high .... It was in this highly charged atmosphere that I emerged into angry adolescence.

At the age of fifteen I joined the National Front, a new force in British politics that demanded the compulsory repatriation of all non-white immigrants....

... At the age of sixteen I became editor of Bulldog, the newspaper of the Young National Front, and, three years later, became editor of Nationalism Today, a 'higher brow' ideological journal....

It was, however, in the context of 'the Troubles' in Northern Ireland that my anti-Catholicism would reveal itself in its full ugliness.... I joined the Orange Order, a pseudo-masonic secret society whose sole purpose of existence is to oppose 'popery', i.e. Catholicism.... As a 'Protestant' agnostic I was allowed to join and a friend of mine, an avowed atheist, was also accepted without qualms....

In October 1978, still only seventeen, I flew to Derry in Northern Ireland to assist in the organization of a National Front march. Tensions were high in the city and, towards the end of the day, riots broke out ... I had experienced political violence on the streets in England but nothing on the sheer scale of the anger and violence that I experience in Northern Ireland.

My appetite whetted, I became further embroiled in the politics of Ulster ... During a secret meeting with the army council of the UVF [Ulster Volunteer Force] it was suggested that I use my connections with extremist groups in other parts of the world to open channels for arms smuggling. On another occasion an 'active service unit' of the UVF, i.e. a terrorist cell, offered their 'services' to me, assuring me of their willingness to assassinate any 'targets' that I would like 'taken out' and expressing their eagerness to show me their arsenal of weaponry as a mark of their 'good faith'.

Pearce served two prison sentences, the last a twelve-month sentence, and both his twenty-first and twenty-fifth birthdays behind bars.

During the first of my prison sentences, Auberon Waugh, a well-known writer and son of the great Catholic novelist, Evelyn Waugh, had referred to me as a 'wretched youth'. How right he was! Wretched and wrecked upon the rock of my own hardness of heart.... Even today, when forced to look candidly into the blackness of my past, I am utterly astonished at the truly amazing grace that somehow managed to take root in the desert of my heart.

What was the catalyst for Pearce? With the wisdom of hindsight, he says he perceive that the seeds of his future conversion were planted at the height of his political fanaticism and anti-Catholic prejudices. The seeds were planted, he says, in "the genuine desire to seek a political and economic alternative to the sins of communism and the cynicism of consumerism." He says that during his confrontations on the streets with his Marxist opponents, he was incensed by their suggestion that, as an anti-communist, he was, ipso facto, a "storm-trooper of capitalism." It was this tension and dilemma that forced his intellectual search.

, but also that he should read the invaluable essay on the subject, entitled "Reflections on a Rotten Apple," which was to be found in a collection of his essays entitled The Well and the Shallows

(rpt., Ignatius, 2006). Pearce purchased the two books and read them. "Imagine my surprise, and my consternation, to discover that the book was, for the most part, a defense of the Catholic faith against various modern attacks upon it," says Pearce. "And imagine my confusion when I discovered that I could not fault Chesterton's logic. The wit and wisdom of Chesterton had pulled the rug out from under my smug prejudices against the Catholic Church." It was, however, destined to be a long journey; and Pearce's essay is far too long for me to relate in any real depth. But it's an amazing journey, to be sure. Pearce was received into the Church on the Feast of St. Joseph in 1989.

Pearce is an excellent writer and historical researcher. All of his biographies provide a literary feast in the exploration of that circle of English, mostly Catholic, writers who have had a remarkable influence upon the Anglo-American Catholic intellectual culture of the last century. The retrieval of that Catholic culture is an invaluable resource for us today. Reappropriating that Catholic culture may help prevent us from being so defenseless amidst the value vertigo of our own times, and help to prepare us for the daunting task of rebuilding a comparable Catholic counter-culture in the future. 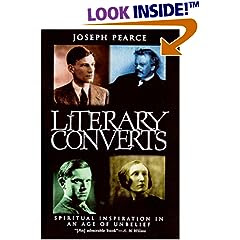 Most of Pearce's books are well-worth reading, and many are outstanding. His treatment of Wilde and, more recently, Shakespeare, come to mind. Of all of Pearce's books, however, one that I most frequently recommend is Literary Converts: Spiritual Inspiration in an Age of Unbelief

(San Francisco: Ignatius Press, 2000). Here is what the Publisher's description says about it:

Literary Converts is a biographical exploration into the spiritual lives of some of the greatest writers in the English language: Oscar Wilde, Evelyn Waugh, C.S. Lewis, Malcolm Muggeridge, Graham Greene, Edith Sitwell, Siegfried Sassoon, Hilaire Belloc, G.K. Chesterton, Dorothy Sayers, T.S. Eliot and J.R.R. Tolkien. The role of George Bernard Shaw and H.G. Wells in intensifying the religious debate despite not being converts themselves is also considered. Many will be intrigued to know more about what inspired their literary heroes; others will find the association of such names with Christian belief surprising or even controversial. Whatever viewpoint we may have, Literary Converts touches on some of the most important questions of the twentieth century, making it a fascinating read.

A reviewer for Publisher's Weekly writes:

This erudite book vividly contrasts the faith that marked the lives of many of Great Britain's more prominent writers of the 20th century with the unbelief that, the author believes, largely marked their times. Many of the book's "converts" began life as Anglicans and then converted to Roman Catholicism, though some, such as C.S. Lewis and T.S. Eliot, remained with the Church of England. Pearce is at his best when he situates writers within the frameworks of a changing Church and a changing world. For example, he claims that the Catholic Church's move away from the Latin mass hastened the emotional deterioration that directly preceded Evelyn Waugh's death....

Now there's an interesting suggestion: Death by Novus Ordo! Well, technically he died three years and several months before the Novus Ordo was actually promulgated by Paul VI in 1970, but the liturgical innovations were by that time already well under way. Read and enjoy!
Posted by Pertinacious Papist at 8:09 PM
Email ThisBlogThis!Share to TwitterShare to FacebookShare to Pinterest
Labels: Arts and Culture, Book notice