William Buckley on the new liturgy 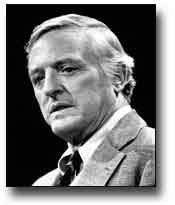 As a Catholic, I have abandoned hope for the liturgy, which, in the typical American church, is as ugly and as maladroit as if it had been composed by Robert Ingersoll and H.L. Mencken for the purpose of driving people away.

Incidentally, the modern liturgists are doing a remarkably good job, attendance at Catholic Mass on Sunday having dropped sharply in the 10 years since a few well-meaning cretins got hold of the power to vernacularize the Mass, and the money to scour the earth in search of the most unmusical men and women to preside over the translation.

The next liturgical ceremony conducted primarily for my benefit, since I have no plans to be beatified or remarried, will be my own funeral; and it is a source of great consolation to me that, at my funeral, I shall be quite dead, and will not need to listen to the accepted replacement for the noble old Latin liturgy. Meanwhile, I am practicing Yoga, so that, at church on Sundays, I can develop the power to tune out everything I hear, while attempting, athwart the general calisthenics, to commune with my Maker, and ask Him first to forgive me my own sins, and implore him, second, not to forgive the people who ruined the Mass.