And then the other shoe dropped ...

The first shoe dropped on the Seventh day of the Seventh month of the Seventh year of the new millennium when His Holiness, Pope Benedict caused great wailing and gnashing of teeth among liturgically revisionist Catholics by issuing his long-awaited Motu Proprio, Summorum Pontificum, legally liberating the traditional Latin Mass from the erstwhile (and continuing) resistance of recalcitrant episcopates.

The second shoe dropped, almost exactly a year later, when Benedict's deputy, the senior Vatican cardinal in charge of Latin liturgy as head of the Pontifical Commission Ecclesia Dei, Cardinal Dario Castrillón Hoyos, speaking on behalf of Pope Benedict, announced on June 14, 2008, as he was preparing to celebrate Mass at Westminster Cathedral in London that the traditional Latin Mass -- effectively banned by Rome for 40 years -- is to be reintroduced into every Roman Catholic parish in England and Wales. 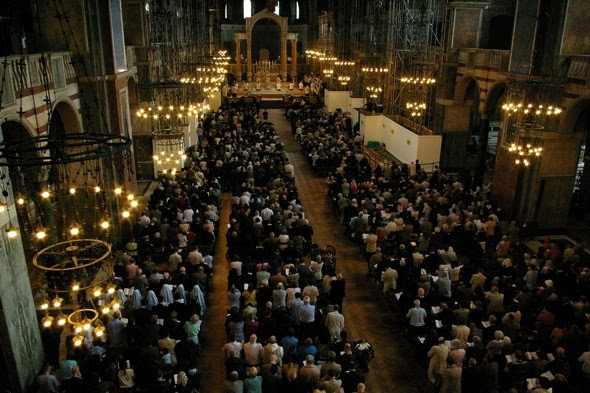 As a point of clarification, when asked whether the Tridentine Mass would be celebrated in many parishes in the future, Cardinal Castrillón Hoyos said: "Not many parishes – all parishes. The Holy Father is offering this not only for the few groups who demand it, but so that everybody knows this way of celebrating the Eucharist."

Damian Thompson, in an article in the London Telegraph entitled "Latin Mass to return to England and Wales" (Telegraph.co.uk, June 14, 2008), wrote:

In addition, all seminaries will be required to teach trainee priests how to say the old Mass so that they can celebrate it in all parishes.

Catholic congregations throughout the world will receive special instruction on how to appreciate the old services, formerly known as the Tridentine Rite.

... Cardinal Castrillón said that the reverent silence of the traditional rite was one of the “treasures” that Catholics would rediscover, and young worshippers would encounter for the first time.

Pope Benedict will reintroduce the old rite – which will be known as the “Gregorian Rite” - even where the congregation has not asked for it. “People don’t know about it, and therefore they don’t ask for it,” the Cardinal explained.

The revised Mass, adopted in 1970 after the Second Vatican Council, had given rise to “many, many, many abuses”, the Cardinal said. He added: “The experience of the last 40 years has not always been so good. Many people have lost their sense of adoration for God, and these abuses mean that many children do not know how to be in the presence of God.”

However, the new rite will not disappear; the Pope wishes to see the two forms of Mass existing side by side.

Needless to say, this announcement is being taken with utmost seriousness by opponents of Benedict's initiative and is certain to stir intense controversy. For his part, the Cardinal stated that the changes would take a few years to implement fully, and insisted -- in line with Benedict's hermeneutic of continuity -- that the widespread reintroduction of the old Mass does not contradict the teachings of the Second Vatican Council.

From Rorate Caeli's summary of events entitled "Cardinal Castrillón in the Archdiocese of Westminster" (June 18, 2008), we also garner the following references:A full photographic record of Cardinal Castrillón Hoyos’s visit and Westminster Cathedral Mass can be seen at: www.traditionalcatholic.org.uk

I think it was a strategic move to make this announcement in England, not because of the evident contemporary resistance to the traditional Mass there, but because of the historic resistance of English Catholics to the banning of the traditional Mass following Vatican II, including the notable success of the late John Carmel Cardinal Heenan (1905-1975) in securing an indult in 1971 from Rome for English Catholics to celebrate the Tridentine Mass, and the support of his successor Basil Cardinal Hume (1923-1999) in preserving the indult. Furthermore, English Catholics have the heroic history of suffering under the penal laws as recusants for refusal to participate in the Anglican liturgy introduced at the hand of Thomas Cranmer during the English Reformation -- a Mass that, in certain respects, looks positively Tridentine compared to the Novus Ordo of Paul VI, produced under the supervision of Archbishop Bugnini in Rome. In other words, many Catholics in Elizabethan England suffered persecution and execution at Tyburn rather than being forced to accept a the new Anglican Mass which looked more "Catholic" in many ways than the new Catholic Mass introduced by Paul VI in 1970. All of these symbolic ironies converge to make England a symbolically and historically strategic site for spearheading this most recent initiative. Let us continue to pray for the revival of the Church and her divine worship.