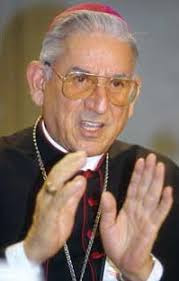 On Friday, May 30th, 2008, the Feast of the Sacred Heart, Darío Cardinal Castrillón Hoyos, the President of the Pontifical Commission Ecclesia Dei, was in Denton, Nebraska, at the invitation of Father John Berg, the Superior General of The Priestly Fraternity of Saint Peter (FSSP), to celebrate the 20th anniversary of the foundation of the Fraternity, and to ordain four young men for the Fraternity. EWTN apprently televized the ordinations.

During his brief visit, the Cardinal consented to grant an interview to the media. The Fraternity has expressed the hope to publish very soon the full contents of the conference, but offered a few highlights in "A Special Report from the American Seminary of the Priestly Fraternity of Saint Peter to all Readers of The Latin Mass: The Journal of Catholic Culture and Tradition" (dated June 2, 2008)

In discussing the origins of the Ecclesia Dei Commission, the Cardinal mentioned the special relationship between the Commission and the Fraternity. When asked the reason for his presence at the ordination, the Cardinal replied, "Well, this is my responsibility! I have the responsibility for the groups of the Ecclesia Dei. This [the ordination day] is an important day for the Fraternity because this is the first ordination after the Apostolic Letter Summorum Pontificum and the Fraternity has been engaged in a very important work for the various dioceses, developing a course to prepare priests in numerous dioceses to celebrate the Gregorian Rite and this is a very good collaboration with the bishops in the United States."

The Cardinal spent some considerable time explaining the attention which the Holy Father has devoted to the restoration of the Traditional Latin Mass as the Extraordinary Form of the Roman Rite. As he stated, "He [The Holy Father] gives special importance to this form of the Latin Rite."

The Cardinal indicated the basis for the Holy Father's attitude when he remarked that, "The theology of the Immemorial Rite is very rich." He explained that this richness consists not principally in the use of the Latin language which is, after all, common to both forms of the Latin Rite, but especially in the profound theological content and character of the prayers in the Traditional Missal. And he further noted the rich cultural elements of the Extraordinary Form such as those to be found in Gregorian Chant: "In it [the Gregorian Rite] was born the Gregorian Chant as a form of piety, and a very high expression of the Faith."

The Cardinal took the media gently to task for the way in which the Holy Father's recent Mass in the Sistine Chapel had been reported. He said, "when the Pope celebrated the Mass in the Capella Sistina [ad orientem at the high alter] they spoke about his 'back to the people.' This is ignorance! When a general is leading his troops, he does not walk backwards in order to avoid turning his back on his soldiers. It's not back to the people -- It's face to God! It's a sacrifice to God."

Asked to comment on the distinctions between the two forms of the Roman Rite, the Cardinal acknowledged that, "It's not easy to make comparisons between the two Rites"; but he spoke very directly in noting that, "Certainly the accent in the Gregorian Rite is the sacrifice ... this Rite considers the sacrifice. It's not necessary to have many other things, but to put all the intensity, the contemplation, in this mystery of salvation."

One member of the press asked, "Does the Pope believe, do you believe that we are moving to a time when the Gregorian or Traditional Rite will be celebrated once a week in most parishes? Would that be a goal?" The Cardinal replied, "Yes, the Pope is aware that this is a richness which he wants to offer not only to those who ask for it but to make it known to all people of God so that the new generations can know and can experience the sanctity, the powerful force of the old Rite. It is not only a privilege for the Fraternity of Saint Peter! It is a treasure for all the Church. The Holy Father would like to have it grow." He went on to note that, "The Holy Father is convinced that this is important for piety and sanctity. He is exercising his duty as the Sanctifier of the Church [munus sanctificandi]. He's making efforts to preserve this marvelous means for the sanctification of the Church."

Another questioner asked if this explained the principal motivation for Summorum Pontificum or whether the motivation includes the reconciliation of the Society of Saint Pius X with the Vatican. The Cardinal explained that the latter was an important but secondary motivation saying that, "The main point is the importance of the sanctity contained within the Gregorian Liturgy."

Among the last questions was this one: "Long-term, do you think that the Holy Father intends the two forms of the Roman Rite to coexist or is he stillthinking of the goal as the Reform of the Reform?"

The Cardinal replied, referring to the possibility of an amalgamation of the two forms, "No, I don't think so. No, I think they are different." He went on to explain that a particular goal would be the elimination of abuses in the Ordinary Form of the Mass, but he added with some humor that even in the old days, priests, being human, could lapse into occasional abuses in the way that they celebrated Mass. And most important, in his exhortation of the Ordinandi he emphasized the lofty goals of the Catholic Priesthood in which always and everywhere, in all celebrations of any approved Catholic Rite, there should be nothing other than a humble fidelity in the liturgy to what Christ, the High Priest, does at the Altar.

The Report concludes with the following petition:

We of the Priestly Fraternity of Saint Peter, during this year of our 20th anniversary ask all the readers of the Latin Mass magazine to join their prayers to ours as we continue the work of forming priests in the Fraternity for a life devoted to the Church's traditional liturgical prayer. And we ask for your prayers as we continue the important work of extended training in the Extraordinary Form to priests throughout North America. May our efforts advance the honor of God and the good of souls.