"I will go in unto the Altar of God
To God, Who giveth joy to my youth"
Tridentine Community News by Alex Begin (August 16, 2020):

The Missal for the Blind

One of the more interesting obscure liturgical books is the Missále Cæcutiéntium, the so-called Missal for the Blind, more accurately described as an altar missal for priests with poor eyesight. It is a large format book with very large print. It contains the Ordinary of the Mass and only two sets of Propers, the Daily Mass for the Dead and the five seasonal Votive Masses of Our Lady. Presumably priests with poor eyesight were given dispensation to be able to use those two sets of Propers even on other Feast Days, through most likely not on the most important Feasts. This writer has only seen editions of this book from prior to 1955; the one whose pages are excerpted below was published in 1921. Nevertheless these missals are not all that rare and turn up with used book vendors relatively frequently. 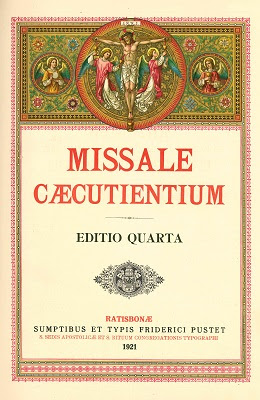 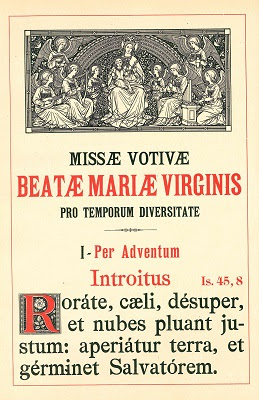 With our current technology, a priest with poor eyesight can supplement one of these missals with copies of the actual Mass Propers for the day blown up on a photocopier for easier readability. One such priest in Florida using this missal actively does just that.

One must appreciate the care and concern that the Church showed for its priests with special needs back when such a specialized book with limited appeal needed to be created and kept up to date via a painstaking manual process, without the convenient computerized typesetting tools we enjoy today.

This 2018 post on Fr. Z’s blog contains a link to a video of bishops saying their daily private Masses during the meetings of the Second Vatican Council: https://wdtprs.com/2018/07/video-bishops-saying-private-masses-during-vatican-ii/ 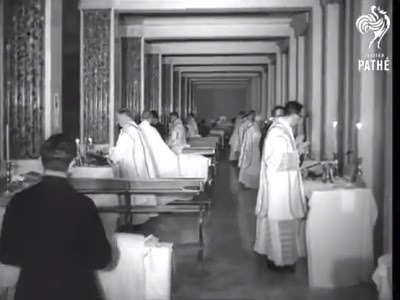 Reader comments following the post remind us of the immense value of daily Masses celebrated individually by priests: Each Holy Mass that is offered brings tremendous graces to the world. When priests concelebrate a Mass, there is only one Mass being offered, not many, and thus the world does not receive as many graces as it would if multiple individual Masses had been offered instead. The Side Altars one sees in older churches were not placed there primarily to serve as devotional shrines, but as functioning altars on which the various priests serving that church would offer their daily Masses.

As the Extraordinary Form of Holy Mass continues to regain popularity, the practice of celebrating individual daily Masses is slowly being recovered. As this column has previously pointed out, the gallery of Side Altars in the main chapel at Detroit’s Sacred Heart Major Seminary is once again seeing regular use, as several priests who teach there offer their daily private Tridentine Masses on them. Some prominent churches known for Traditional Liturgy, such as the Birmingham, Oxford, and London Oratories in England, have always made frequent use of their Side Altars for private Masses. Last but not least, here in metro Detroit and Windsor you can witness multiple priests offering simultaneous Low Masses on the Side Altars of a church on All Souls Day, a tradition we hope to continue in 2020 at a church yet to be announced.

The weekly Saturday Low Mass at Miles Christi’s Family Center Chapel is now being held at 8:00 AM, 30 minutes earlier than before.