"I will go in unto the Altar of God
To God, Who giveth joy to my youth"
Tridentine Community News by Alex Begin (September 6, 2020):

Twelfth Metro Detroit Weekly Sunday Tridentine Mass Site Debuts on September 13: St. Priscilla, Livonia The twelfth weekly Sunday Tridentine Mass, and the 36th Traditional Mass site in metro Detroit and Windsor, debuts on Sunday, September 13 at 1:00 PM at St. Priscilla Church in Livonia. Administrator Fr. Joe Tuskiewicz, one of metro Detroit’s best-known roving celebrants of the TLM, will be offering this Mass at the request of some parishioners and with the support of his Parish Council. Music for this High Mass will be supplied by parish music director Felicity Long, a member of the family whose multi-generational members have served as music directors for Latin Masses at Assumption Grotto, St. Edward on the Lake, Immaculate Conception Lapeer, and Ss. Cyril & Methodius Sterling Heights. 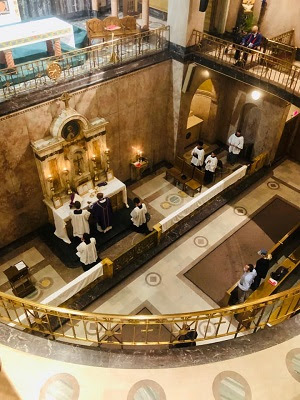 Thanks to everyone who turned out on Friday, August 28 for the first Traditional Mass in the lower level church at St. Aloysius in Detroit. The acoustics were amazing! And Administrator Fr. Mario Amore invited us to hold more Masses there in the future. A little-known fact: The lower level High Altar came from the original St. Aloysius Church and dates to 1873. Imagine how many thousands of Holy Masses must have been celebrated on that altar up until it got idled around 1965. A perfect setting for the Traditional Mass. [Photo by Fr. Mario]

Side Altar Spotted in Use at St. Hugo 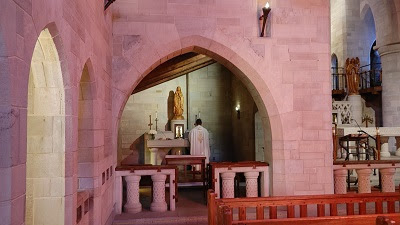 On Saturday, August 29, this writer randomly walked into the St. Hugo Stone Chapel and found a priest saying a private Mass at a Side Altar. In over 50 years of visiting this chapel, never, ever has a Side Altar been seen in use. How beautiful and appropriate to see these architectural elements once again used for the Holy Sacrifice. 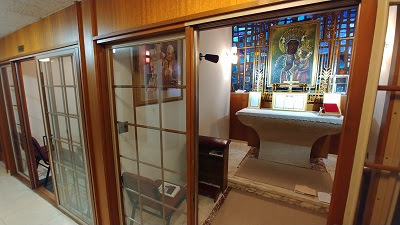 In a further sign of the times, that same Saturday, August 29 at 12:00 Noon, two simultaneous Traditional Masses were offered at Orchard Lake Seminary’s Archdiocesan Shrine Chapel of St. John Paul II: In the main church there was a scheduled High Requiem Mass celebrated by Msgr. Ronald Browne, while in one of the chapels in the sacristy, an unscheduled Low Mass was offered by Fr. Lukasz Iwanczuk at the request of two seminarians. For those who have not been back there, the expansive sacristy has six private chapels – six small rooms with ad oriéntem altars and seating for two faithful each – in which seminary priests can and do offer their daily Masses.

Because of Fr. Paul Ward’s planned time away from the parish, there will be no Traditional Masses at Holy Family Church in Detroit on Monday, Wednesday, and Friday, September 14, 16, 18, 21, 23, and 25. Weekday Masses will resume at 12:00 Noon on Monday, September 28.

Interesting tidbit: Franciscan Friars of the Holy Spirit from St. Mary of Redford serve the Monday Masses at Holy Family.