"I will go in unto the Altar of God
To God, Who giveth joy to my youth"
Tridentine Community News by Alex Begin (August 2, 2020): 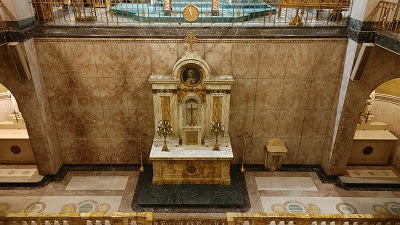 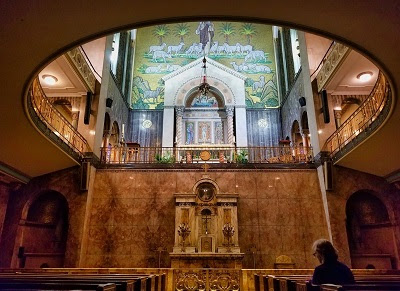 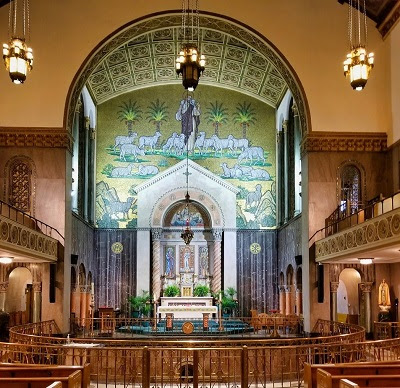 Untouched, unmodernized, and apparently not used for Mass in over 50 years, the amazingly intact lower level crypt church at St. Aloysius Church in downtown Detroit will host a Traditional Mass for the first time since the reforms of Vatican II on Friday, August 28 at 7:00 PM.

The music will be directed by Wassim Sarweh. St. Aloysius, located on Washington Boulevard near the Book Cadillac Hotel, is a unique tri-level structure: The second floor has a U-shaped balcony containing the pipe organ and overflow seating. The main floor contains the main sanctuary, framed in a theatre-like proscenium. The real gem is a lower-level church visible through a cutout inside the Communion Rail, reminiscent of the confessio at St. Peter’s Basilica in Rome. With a High Altar, two Side Altars, a Communion Rail, and two confessionals, the lower level church is a perfect setting for the Extraordinary Form.

Fr. John McKenzie, a former monk of the Benedictine monastery in Norcia, Italy which celebrates the Traditional Mass exclusively, will be the celebrant. He is now a diocesan priest assigned to the National Shrine of the Little Flower Basilica in Royal Oak. It will be a High Votive Mass for Any Necessity, with the specific intention of ending racism. Fr. McKenzie works with the Archdiocese of Detroit’s Office of Black Catholic Ministries and believes the Traditional Mass has a key role to play now, as it has historically, in uniting Catholics of all races.

Juventútem Michigan will offer a social event for young adults age 18-35 afterwards. Many thanks to St. Aloysius Administrator Fr. Mario Amore for welcoming this special Mass.

Last Sunday, July 26 at 2:00 PM, Detroit’s St. Josaphat Church offered its first Traditional Mass in several years for the Feast of Ste. Anne. This currently underutilized grand edifice was home to the Archdiocese’s first and only indult Mass starting in October, 2004. Tridentine Masses ended there after the Institute of Christ the King took over nearby St. Joseph Shrine.

[Comments? Please e-mail tridnews@detroitlatinmass.org. Previous columns are available at http://www.detroitlatinmass.org. This edition of Tridentine Community News, with minor editions, is from the St. Albertus (Detroit), Academy of the Sacred Heart (Bloomfield Hills), and St. Alphonsus and Holy Name of Mary Churches (Windsor) bulletin inserts for August 2, 2020. Hat tip to Alex Begin, author of the column.]
Posted by Pertinacious Papist at 8:07 AM
Email ThisBlogThis!Share to TwitterShare to FacebookShare to Pinterest
Labels: Detroit, Latin Mass, Liturgy, News