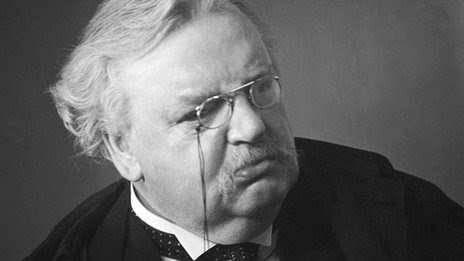 Of course, with the cartoons about the Vatican turning into a "canonization factory," there's no telling who may canonized next, maybe even G.K. Chesterton. Our underground correspondent we keep on retainer in an Atlantic seaboard city that knows how to keep its secrets, Guy Noir - Private Eye, just wired us this remarkably thoughtful and detailed account of his own demurrals on precisely that prospect:

Over at Unum Santcum Catholicam there is this excellent and long-overdue rejoinder to all the breathless nonsense about a St. Gilbert now being proposed by professional Chestertonians. I have repeatedly generated ire for pointing out in com boxes that his biographer Maisie Ward -- who knew him personally -- was dismayed over Chesterton's over-imbibing in his last years. But as this piece points out, the predictable response is always that GKC had to be a saint because, well, we like him and thus we want to to be one! Such a spirit seems to be the guiding one nowadays with canonizations. It's messed up. The widening of the process has given us more saints, but it has also cheapened the brand. Sainthood is a ceremonial process that is supposed to not only affirm someone's life with God but also his or her worthiness as a public model of emulation and heroic sanctity. Saints are supposed to be heroes. Chesterton as a hero?! Good writers are simply not heroes by virtue of their literary prowess, or their sense of humor. Kenneth Woodward, liberal on some points, is objectively helpful in his treatment of the whole process in Making Saints. Highly recommended. Especially now, when names are floated about including those of Catherine de Hueck and Dorothy Day... despite what a firsthand associate like Frank Sheed might have written about them. People just don't care if these souls were holy by objective standards (or uniquely heroic in an age where we now ascribe hero status to everyone who enlists in the Armed Forces). Any more than they might give pause to describing Pope Francis as holy due to personal unfamiliarity with him. Today we think people are saints or holy because we approve of what we think they represent. It's "Identity Catholicism" off the rails. And it's all backwards. Saints aren't proven by their causes; their causes take on added luster based on saintly associations. Vatican II does not make Paul VI a saint. Chesterton's writings hardly make him a saint. But if he becomes a saint, his writings would gain that added sparkle. I say if. But he appears to have been no more a saint than Tolkien, or than Belloc. And Belloc, for one, was by all accounts most definitely not a saint.