Tridentine Community News - Extraordinary Form Vespers at St. Peter’s Seminary; The Unfortunate Consequence of Concelebration; Lex Orándi: A Book Comparing the Seven Sacraments in the EF vs. OF; The Order for Blessing Water, EF vs. OF; New Traditional Masses in Rome

"I will go in unto the Altar of God
To God, Who giveth joy to my youth"
Tridentine Community News by Alex Begin (June 2, 2018):

On Friday, May 24, St. Peter’s Seminary in London, Ontario offered Vespers according to the Extraordinary Form for the first time in almost 50 years. Music was provided by the Canadian Renaissance Music Summer School. It’s always heartening to hear of seminarians being exposed to the liturgical traditions of Holy Mother Church. More information about the event is available at: https://www.crmss.org/course.html?fbclid=IwAR1-xzQgRMV-HVlUMrDyn7WtGjt-hzqRdlqNUGytHaru0PmZqcXx4x4dLVw

The Unfortunate Consequence of Concelebration

The July 26, 2009 edition of this column contained a defense of individual celebration of the Mass. In a nutshell, the post-conciliar development of concelebration deprives the Church of the infinite graces that derive from each individual celebration of Holy Mass. Even when a priest celebrates Mass privately, the Angels attend and adore the Eucharist made present. Whereas prior to Vatican II, churches’ Side Altars would be busy with priests celebrating their daily Masses, nowadays it is all too easy for priests, especially those living in community, to concelebrate Mass rather than to celebrate individual Masses. The world is thereby being deprived of additional graces that those extra Masses would bestow. 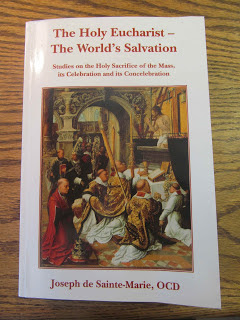 The Holy Eucharist—The World’s Salvation: Studies on the Holy Sacrifice of the Mass, its Celebration, and its Concelebration, by Fr. Joseph de Sainte-Marie, OCD, published in 2015 and with a foreword by Dom Alcuin Reid, is “the definitive study of concelebration”, according to Dr. Peter Kwasniewski. This is the first English translation of a book originally written in 1982. This almost 600 page work is, per Dr. Kwasniewski, “sometimes distressing”, as it provides abundant evidence supporting the assertion above.

Scholarship of this sort is necessary to convey that what may seem aesthetically appealing and convenient on the surface is actually a detriment to mankind’s spiritual welfare.

Lex Orándi:A Book Comparing the Seven Sacraments in the EF vs. OF 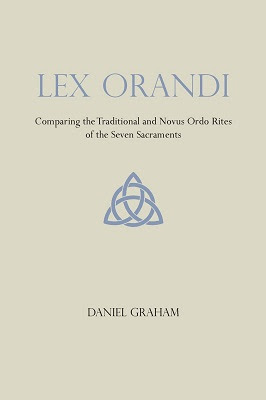 Much has been said and written about the differences between the Extraordinary and Ordinary Forms of the Mass. Many authors, including this writer, have produced side-by-side comparisons of the two (see the Tridentine News archive web page, listed at the bottom of this page). A book entitled Lex Orándi, published in 2015 by Daniel Graham, has taken the concept a step further and presents side-by-side comparisons of all seven Sacraments, including commentary. Studies such as this will help the faithful appreciate just how much has been lost in the new, simplified forms of these Sacraments. Such knowledge can only help promote the restoral of the classic forms.

Lex Orándi may be ordered from Amazon.com.

The Order for Blessing Water, EF vs. OF

In a similar vein, Dr. Daniel Van Slyke has published a comparison and analysis of the Extraordinary and Ordinary Forms of blessing Holy Water. The Traditional Form, used among other occasions before Sunday Mass to bless the water used in the Aspérges, exorcises and blesses salt, exorcises and blesses water, has a prayer over the commingling of the two, and a concluding prayer. The far simpler Ordinary Form blessing lacks the succinct and direct language of the classic formula, making the objective of the blessing less clear. 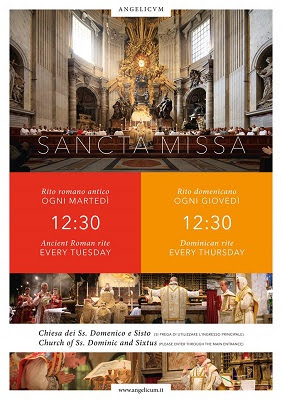 For many years, there have been only three principal sites for Holy Mass in the Extraordinary Form in Rome: 1) Certain early morning Side Altar Masses at St. Peter’s Basilica, 2) The FSSP parish of Santissima Trinità dei Pellegrini, and 3) The ICRSP church of Gesu e Maria al Corso.

Recently another site has debuted: The Pontifical University of St. Thomas Aquinas, also known as the Angelicum, is now offering the Tridentine Mass every Tuesday at 12:30 PM, and the Traditional Dominican Rite every Thursday at 12:30 PM, both at the Church of Ss. Dominic & Sixtus.