"I will go in unto the Altar of God
To God, Who giveth joy to my youth"
Tridentine Community News by Alex Begin (June 23, 2019):

Culinary Institute of America Hosts the Traditional Mass in Its Chapel

When contemplating unusual settings for the Traditional Latin Mass, this writer often recalls the (no longer existent) St. Bernardine Chapel in the C-level basement of the Arco Tower in downtown Los Angeles. Hidden down some antiseptic white hallways reminiscent of the movie Andromeda Strain, it was an exercise for a newcomer to try to find this Mass site. 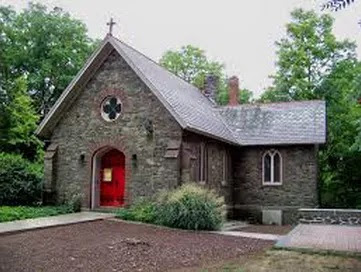 The June 6, 2019 edition of Catholic New York, the Archdiocese of New York’s newspaper, featured a list of Extraordinary Form sites in the diocese, and one location really caught this reader’s eye: Our Lady of the Way Chapel on the grounds of the Culinary Institute of America in Hyde Park. Students there, as well as the general public, are offered the Traditional Latin Mass every Sunday at 10:00 AM and every Wednesday at 12:00 Noon. The Catholic presence there can be traced to the campus having been originally built as a Jesuit Novitiate.

One would imagine the post-Mass receptions would be out of this world.

There has been a confluence in recent years of several trends: Communities upset to see their churches close formerly had no clear path to pursue a viable alternative reuse of their beloved buildings. Issues of both canon law and financial realities made it difficult to translate hopes and dreams into achievable plans for restoration.

A market abhors a vacuum, so it’s no surprise that two sorts of enterprises are appearing that are helping frustrated communities take practical action:

First are canon law consultants who specialize in arguing the legal aspects of saving old churches. That’s a topic for another column. 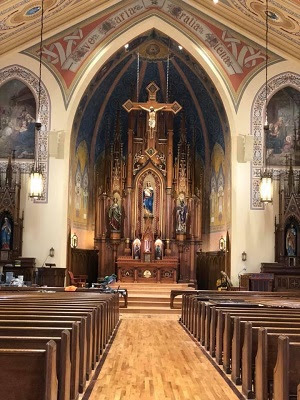 Second are architectural restoration outfits which are willing to undertake more challenging efforts, ones without an existing fundraising or operational plan. Standing out among this nascent group is JAGH Preservation, a non-profit organization which both outright acquires historic churches or partners with existing stakeholders to save their existing edifices. This isn’t a pipe dream; JAGH was involved in a successful restoration of St. Mary Church in Columbus, Ohio [pictured above], and has acquired St. Andrew’s Church in Fort Wayne, Indiana [photo below] for restoration as a Franciscan oratory and convent for the Poor Clare Sisters. For the latter, a full exterior and interior restoration is planned, including a new High Altar and Communion Rail. 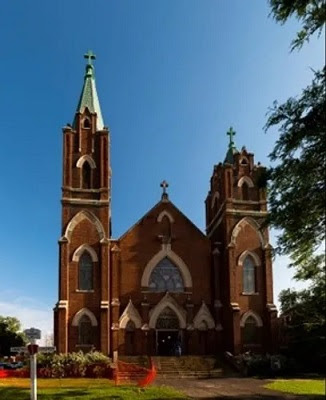 For more information visit their web site at: https://jaghpreservation.com/ and their Facebook page at: https://www.facebook.com/helpprotecthistory1/