"I will go in unto the Altar of God
To God, Who giveth joy to my youth"
Tridentine Community News by Alex Begin (August 13, 2017): 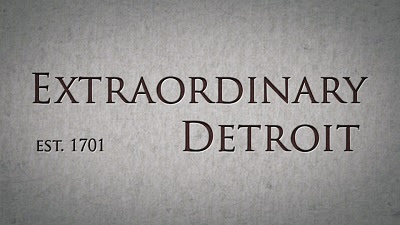 There is progress to report on producer Peter Cherlet’s video documentary about the history of the Latin Mass movement in metro Detroit and Windsor. Last reported upon by this column in our November 1, 2015 edition, Peter’s project now has a name: Extraordinary Detroit. Peter’s employer ChurchMilitant.com will now be helping him edit his footage and create the final output. You can view excerpts of the production on the new Extraordinary Detroit Facebook page, including interviews with Wassim Sarweh at Old St. Mary’s Church and Christopher Din at St. Josaphat Church: https://www.facebook.com/Extraordinary-Detroit-1513800792020874/ 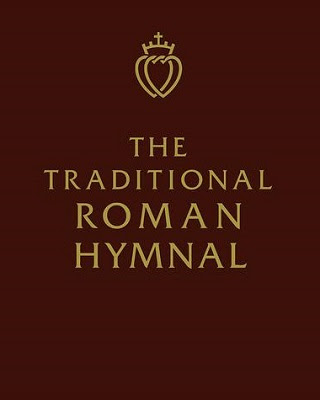 After much study in the mid-2000s, both St. Josaphat Church and Windsor’s St. Benedict Tridentine Community chose to purchase copies of the Angelus Press Traditional Roman Hymnal for use in the pews. At the time it had little competition as an in-print hymnal primarily intended to support Latin Masses. Nowadays there are newer, alternative publications, such as the second edition of the Adorémus Hymnal, Boston’s updated St. Paul’s Hymnal, and the heavily-promoted St. Edmund Campion Missal & Hymnal.

We had been contacted several years ago to provide input for a second edition of the hymnal, but news about the project ceased to be forthcoming about the same time that the first edition of the TRH went out of print. Rare copies sold for astronomical prices, indicating there was, indeed, demand for this sort of publication.

This week Angelus Press announced that the long-awaited second edition of the Traditional Roman Hymnal has at last made it to print. Information about its expanded contents is here: https://angeluspress.org/products/traditional-roman-hymnal-2nd-ed

So will we be using this hymnal? Probably not. Years ago we conducted an experiment: Would more parishioners sing if we provided them with hymnals, or with music inserts in our Propers Handouts? The answer became clear: There was far more vigorous singing with the hymn inserts. They are clearly easier to use; no carrying of books or looking up the hymns of the day is necessary. Since the Gregorian Mass settings and hymns we employ are old and out of copyright, there is no particular reason to have our congregation use a resource which they have demonstrated they find somewhat inconvenient. Thus we ceased passing out our copies of the first edition of the TRH in favor of the printed music inserts. 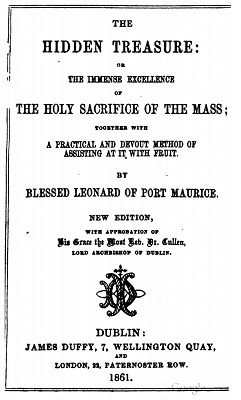 Google has done an immense service by scanning in and making available for free countless out-of-print books. One intriguing example is the rather brief, 134 page treatise by St. Leonard of Port Maurice: The Hidden Treasure: or the Immense Excellence of the Holy Sacrifice of the Mass; Together with a Practical and Devout Method of Assisting at It with Fruit. This work from 1861 contains beautiful spiritual reflections, with chapters such as, “Three Special Excellences of the august Sacrifice of the Mass,” “An Easy Method of assisting at Holy Mass with great Fruit”, and “How you should act after receiving the Holy Communion.” Written in old-fashioned, reverent English, this plain-speaking book of sound spiritual advice is a fast read, perfectly suited to be read on one’s tablet or smartphone, in one sitting or piecemeal during idle moments. The book is available on the Google Play Books e-reader app, or in PDF form from HERE:

Food for Thought from Archbishop Sample

The quote of the week comes from Portland Archbishop Alexander Sample, who at the recent Oregon Sacred Liturgy Conference asked, “We need to pause and ask ourselves: what is it about a more traditional expression of the sacred liturgy that draws so many young people? I think that is a really important question for the Church to reflect on.”

[Comments? Please e-mail tridnews@detroitlatinmass.org. Previous columns are available at http://www.detroitlatinmass.org. This edition of Tridentine Community News, with minor editions, is from the St. Albertus (Detroit), Academy of the Sacred Heart (Bloomfield Hills), and St. Alphonsus and Holy Name of Mary Churches (Windsor) bulletin inserts for August 13, 2017. Hat tip to Alex Begin, author of the column.]
Posted by Pertinacious Papist at 10:19 PM
Email ThisBlogThis!Share to TwitterShare to FacebookShare to Pinterest