In his Vicars of Christ: A History of the Popes

(Arcadia: Tumblar House, 2014), 380-90, Charles Coulombe makes the following insightful observation about the difference in 'style' between Benedict XVI and Francis:

The generation of westerners of which [Francis] is a part was marked -- in Church, State, and indeed, in every field -- by what can only be called a sort of "personalization" of authority. That is to say, that the traditional division in perception between an office and the current holder of that office -- which allowed people of wildly differing, sometimes even opposed, views to collaborate out of shared respect for the office under whose direction they functioned -- has been blurred or even obliterated. Such folk, when in authority, tend to downgrade or do away with traditional symbols of their office while emphasizing their own personalities in pursuit of some nebulous "authenticity." So it is that morning dress and uniforms disappear from presidential inauguration and legislatives openings, and royals love to appear in casual wear. The difficulty with such an approach is that it tends to weaken respect for the office in the eyes of its subjects, who in turn begin to believe that their loyalty to it is dependent purely on their personal feelings for the occupant of the moment. Seeing the problems this had created, Benedict XVI began to restore the symbolic side of the Papacy, for all that formalism and display ran extremely counter to his nature. But it is not an issue that one of Francis's generation could be expected to understand -- quite the contrary.... Despite the lack of tiara noted earlier, piece by piece [Pope Benedict] restored bits of the papal wardrobe that his immediate predecessors had discarted: the fur-lined mozzetta, the camauro, the fanon, and -- most annoying to some -- the traditional red shoes, symbolizing the fact that as Pope he walked in the footsteps of the martyrs. 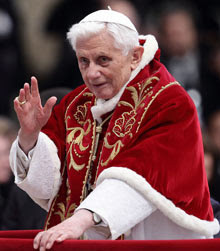 Commenting on this passage, Prof. Peter A. Kwasniewski writes about Benedict:

This humble Bavarian who shied away from the limelight saw that it was necessary to elevate and accentuate the sacramental iconicity of the pontiff in order to move beyond the cult of personality inadvertently started by John XXIII and vastly augmented in the charismatic athlete, actor, poet, and playwright of John Paul II. With Pope Francis, we see a return both of the cult of personality and of the false conception of poverty, this time applied not only to liturgy but also to doctrine itself.

By "poverty of doctrine," Kwasniewski explains, "I refer to the superficiality, messiness, ambiguities, contradictions, and unclarity of this pope's teaching, in contrast to the rich truthfulness of those of his predecessors who take seriously the Lord's command to 'let what you say be simply 'yes' or 'no' (Mt 5:37); cf. 2 Cor. 1:17-19, Jas. 5:12. (Peter A. Kwasniewski, "True Poverty of Spirit in the Splendor of Worship," The Latin Mass: The Journal of Catholic Culture and Tradition, Vol. 26, No. 2 (Summer 2017), p. 14.
Posted by Pertinacious Papist at 8:38 AM
Email ThisBlogThis!Share to TwitterShare to FacebookShare to Pinterest
Labels: Catholic opinion, Church and society, Culture, Pope Benedict XVI, Pope Francis, Pope John Paul II, Pope John XXIII, Popes