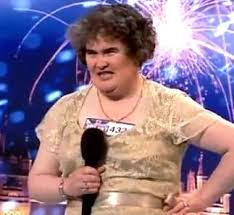 I always get a nice lift from this YouTube clip of that most unlikely talent, Susan Magdalane Boyle, turning the tables on her judges when she first appeared as a contestant on the reality TV program, Britain's Got Talent, on April 11, 2009, singing "I Dreamed a Dream" from Les Misérables. You can see the judges and members of the audience rolling their eyes in disdain as she walks on stage and begins answering the judges' questions in the brief preliminary interview. Truth be told, she looks the part of a born loser. Then, out of the mouth of this homely matron, God brings forth voice and song such as nobody expects. There is a moment of stunned silence, then the entire audience explodes in applause. God laughs. If we had any sense at all, we should weep.

Boyle still lives in the family home, a four-bedroom council house, with her 10-year-old cat, Pebbles. Her father died in the 1990s, and her siblings had left home. Boyle never married, and she dedicated herself to care for her ageing mother until she died in 2007 at the age of 91. Boyle has a reputation for modesty and propriety, admitting during her first appearance on Britain's Got Talent that she had "never been married, never been kissed". A neighbour reported that when Bridget Boyle died, her daughter "wouldn't come out for three or four days or answer the door or phone."

Boyle is Catholic and sang in her church choir at her 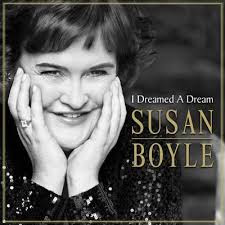 church in Blackburn, West Lothian, Scotland. Boyle remains active as a volunteer at her church, visiting elderly members of the congregation in their homes.["Susan Boyle," Wikipedia]

Her first album, Susan Boyle: I Dreamed a Dream,

was released in November 2009 and debuted as the number one best-selling CD on charts around the globe.
Posted by Pertinacious Papist at 10:23 PM
Email ThisBlogThis!Share to TwitterShare to FacebookShare to Pinterest
Labels: music, People, Popular culture

It's all staged -- they had exactly the same scenario for Paul Potts, mobile phone salesman who could sing Puccini -- now listening to his recordings people realize they've been had.

Sorry to throw cold water on this, but it is SO similar to the set up with the Paul Potts appearance, that I think the only ones surprised were the audience. Everyone involved with the show productions knew exactly what was going to happen.

Take a look at Alice Ridley on America's Got Talent.

Well, the woman has a fine voice and can sing, as listeners from her church and of her fist CD know (despite technical flaws in the recording).

One or two of you are saying that the show set the audience up. I have no knowledge of that, though it wouldn't surprise me from what I've heard of TV shows involving live audiences these days.

Assuming this were so, what would change. Not much. The live audience and the world beyond the show discovered a great surprise that day: an unlikely woman who can sing.

Assume the unlikely worst -- that she were only lip syncing the words to someone else's recorded voice. What would change? The whole thing would be a piece of fiction. So what? We would have then been regaled by a wonderfully inspiring Cinderella story, like a good novel or movie.

Having said that, I don't yet see any hard evidence of any such scam. I see cynical speculation, but no hard evidence. Perhaps you can produce some? Otherwise, it's conspiracy theory all over again.

So what? We would have then been regaled by a wonderfully inspiring Cinderella story, like a good novel or movie.

I see cynical speculation, but no hard evidence. Perhaps you can produce some? Otherwise, it's conspiracy theory all over again.

I have no hard evidence and am not formally accusing the show of deception. Separating the the gnat poop from the pepper on television is not something that I am willing to give much time to. It's just my general impression. I think she really can sing like that, and that is wonderful with or without the questionable context.

Good point about fact/fiction, Mr. R. Graffiti. As to the rest, then, it seems we are agreed. There's no good evidence that the thing was staged. Lip syncing is, beyond a reasonable doubt, an absurd hypothesis. She's certainly doing her own singing, and a good job of it.