And now, for something to make your heads explode

Jero (ジェロ, born Jerome Charles White, Jr. in Pittsburgh, Pennsylvania, on September 4, 1981) is a Japanese enka singer who is American-born of African-American and Japanese descent. His maternal grandmother was Japanese, and it was under her influence that Jero was first exposed to enka. Jero is the first black enka singer in Japanese music history.

Jero has been a major phenomenon in contemporary Japan. In this video clip, you can see Jero being interviewed by a Japanese emcee on a Japanese enka music show. If you know the language, you will note that Jero is absolutely fluent in Japanese. They speak briefly about the song he is about to sing. He mentions the influence of his Japanese maternal grandmother. A snapshot is shown of him together with her, as well as a video clip of him as a five-or-six-year-old boy singing an enka song (although he says that at the time, he did not understand the meaning of the Japanese words). If you pay close attention, you may note that the song, like all enka music, employs the pentatonic scale. 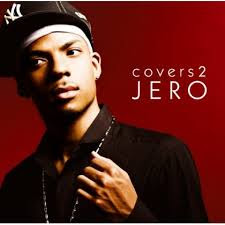 Returning to real time, Jero then says that he intends to dedicate his song on the show today to his grandmother, giving it everything he's got. He then stands, bows to those seated on stage, walks to center stage as the music begins, bows to the audience, and begins. It is not only these bows or his facility with the language, but every little gesture of his hands and limbs, the nods of his head while speaking, etc., that are altogether aboriginally Japanese in form, giving this performance an air of deliciously mind-numbing implausibility -- as if a dolphin had sprouted wings learned to fly. There he stands, looking for all the world like an African-American male hip-hop singer. He's from Pennsylvania, for crying out loud, and a graduate of the University of Pittsburgh! And yet, there he stands on stage in an enka music show in Japan, in his New York Yankee's outfit, hat on crooked, hat and shirt in fire engine red (a color considered garishly unfitting for males in Japan); and, forthwith, he breaks out in a PERFECTLY-executed enka song.

It may not be your taste in music. God knows it was not mine, growing up in Japan, though it was ubiquitous, and has only recently taken on a nostalgic quality for me personally. But it does a real number on me to be trundled down memory lane by THIS fellow, who, if I had my eyes shut, could pass for a native Japanese singer! Again, God must be laughing.

(This genre is superlatively sentimental, as it probably goes without saying. For anyone who cares, I have a brief Amazon review of an enka album by Ishikawa Sayuri, probably my favorite female vocalist in this genre, and someone who, wearing her kimono, would offer a more traditional Japanese image of what enka singers are typically like. Here are two of her signature songs on YouTube: "Amagigoe" and "Tsugaru Kaikyou Fuyu Geshiki, along with "Daikon no Hana" from her 2010 album.)
Posted by Pertinacious Papist at 2:06 PM
Email ThisBlogThis!Share to TwitterShare to FacebookShare to Pinterest
Labels: Japanese culture, Popular culture

I don't know what to say. Awesome.

beauty will save the world.

This is great too: http://www.youtube.com/watch?v=VvAgVbDni1Q&feature=related