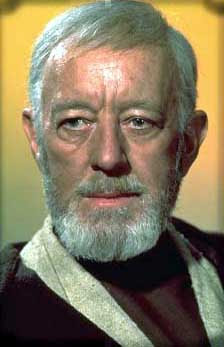 On the recommendation of my friend, Donegan Smith, himself a retired Hollywood actor and Catholic convert, I've been reading Piers Paul Read's Alec Guinness: The Authorized Autobiography

. The book lets one into the deeply private side of Alec Guinness's life. Guinness traveled in a circle of friends that included Catholic writers such as Graham Greene and Evelyn Waugh. At one time, he visited Asheville, North Carolina, and I'm sure spent time in the Basilica of St. Lawrence there, as well as the Biltmore House, before traveling on his way to New Orleans.

As Fr. O'Leary will tell you, he also inhabited a world of actors famed for its society of homosexuals, the OUDS, among them Peter Glenville, Robert Flemyng, Terence Rattigan and presided over John Gielgud who, in 1932, was elected president of the organization. Guinness, too, was tormented by homosexual inclinations. But the difference between himself and those who embrace a lifestyle of open defiance of Church teaching is plain. Guinness sought reconciliation with God, found a priest, became a Catholic and took on the discipline of confession and amendment of life:

There were to be found then, as there are now, confessors who take a lenient view of sexual sins. A close friend of Alec's in the later years of his life, Quentin Stevenson -- a homosexual and once a Catholic -- describes 'the sort of Farm Street talk: "oh, you shouldn't have gone to confession there, you should have gone to Farm Street because Fr. So-and-so is sweet about that sort of thing" ... The very people who go on about how wonderful it is being a Catholic because of the Church's authority will, ten minutes later, tell you about the private arrangements they have made with God.' In Catholic parlance, absolution - the forgiveness of a penitent's sins by a priest, acting on the authority of Christ who had told his disciples that those whose sins they forgave were forgiven -- depended not just on an Act of Contrition made before the priest in the confessional, but also on a 'firm purpose of amendment' -- a determination not to commit the sin again. (pp. 277-278)

I was interested in noting how often Piers Paul Read cited the work of the excellent Catholic biographer, Joseph Pearce. "No one," wrote Pearce in Literary Converts: Spiritual Inspiration in an Age of Unbelief

, "has been able to describe a conversion in terms which are objectively appropriate. As in the language of mystics, analogies which give only a shadow of the substance have been used." Here, too, such analogies and shadows must suffice. Why did Alec become a Catholic?:

Alec became a Catholic because he accepted that the Roman Catholic Church was the Church founded by Jesus Christ, the Second Person of a Trinitarian God. But long before Alec's formal 'reconciliation' he had been living the life of a Catholic more conscious than most Roman Catholics that the Church was a community of the living and the dead. He prayed to Mary, the Mother of God, said the Rosary, and conversed with his favourite Catholic saints, calling for their intercession in the greatest and smallest of causes -- a votive candle lit so that Matthew might walk again, or a request to St. Anthony of Padua to loosen the nuts on a wheel.

But Alec also felt that he had had a direct experience of God Himself, and of God's grace; and in the final analysis this was the point of departure of his conversion. 'I think most ... human beings have that once in their lives,' he wrote to Merula [his wife] from Los Angeles:

...in greatly varying degrees of course. And of course it's the most supreme, happy, and important moment of life. I believe it is ... God giving each man and woman, according to their capacity, a glimpse of his promise to them, an impression of what eternity could mean, a glimpse of their adoption as Sons of God, and by its withdrawal a realisation of what the Fall of Man means. We are all left with a feeling of exhiliration and yet at the same time, hand in hand with its happiness, a sadness that we are unlikely to encounter it again in this life. It's a golden carrot held up to donkeys -- who could be gods ... (pp. 281-282)

After Alec's own conversion, his gentleness with his wife is beyond touching. He insisted that any decision about Catholicism must be hers alone:

I can't help you my love. All I can suggest is three things (1) whether you feel as I'm sure you do that Christ was true in his claims and is God (2) whether you are satisfied that the claims of the Catholic Church are reasonably justified. And then (3) -- probably more difficult for you than for me, as it's a question of temperament to start with -- whether in a Catholic Church you feel a sense of worship. For me this last grows. I find it less and less a difficulty -- in fact none really -- except through my own fidgetiness and distraction and general crossness with people and things -- but I accept absolutely now and with no effort that I am in the actual presence of God on the altar. There have been very few days this year when I haven't paid a visit -- even if only for three minutes -- to a church, merely to kneel and be astonished at the humility of God. (p. 296, emphasis added)

One marvels here at these words. Remarkable indeed. Some time in December of 1956, Merula resolved her doubts and was received into the Roman Catholic Church. She told Alec, reports Read, only when she and Matthew joined him in Ceylon, "where the three celebrated their first Christmas together in the same church."

Later, when Alec visited the United States, he was distressed by aspects of American Catholicism. After Mass at the Jesuit-run Boston College on one occasion, he wrote:

I felt obliged to complain to one of them, a good friend of mine, of how Mass was said at the St. Francis Xavier chapel. Seven minutes flat from the opening of Mass until the end of the Gospel and nine minutes from the beginning of the Credo to the end!... The sign of the cross was reduced to a hurried scratching of the stomach and the 'elevations' were soblasphemously hurried that I thought there might easily be an accident. O dear oh dear oh dear. And why why why? I found it very disturbing. I wrote an angry note to the priest in charge and then tore it up as useless as well as uncharitable. (p. 358)

Both Alec and Merula remained remarkably loyal to the Church although both were subject to tests of their faith and suffered from the radical changes that came about in the Roman Catholic Church as a result of the Second Vatican Council:

The most evident change following Vatican II was to the liturgy, and one of the greatest trials for those like Alec and Merula who had joined a church with a Latin Mass was suddenly to find it said in an English of great triteness and banality. The officiating priest, who had mysteriously re-enacted the sacrifice of Christ upon the Cross with his back to the congregation, now facedhis parishioners from the other side of a table like a jovial scout-master serving orangeade and cupcakes in a village hall. The age-old plain-chant, or the melodious hymns of the pre-Conciliar church, were replaced by commonplace ditties or African dirges.

Two of Alec's Catholic friends reacted to these changes in different ways. Graham Greene managed to bend to this wind of change: his novel, A Burnt-Out Case

, suggests a loss of faith in the mystical and magical Catholicism that had inspired some of his earlier works. Greene became a partisan of revolutionary movements in South America ....

Evelyn Waugh, whose Augustinian Catholicism had so appealed to Alec, was at first optimistic that the Church would weather the storm.... Later, however, Waugh's optimism evaporated. 'A year in which the process of transforming the liturgy has followed a planned course,' he wrote in his diary on Easter Day, 1965:

Protests avail nothing ... More than the aesthetic changes which rob the Church of poetry, mystery and dignity, there are suggested changes in Faith and morals which alarm me. A kind of anti-clericalism is abroad which seeks to reduce the priest's unique sacramental position. The Mass is written of as a 'social meal' in which the 'people of God' perform the consecration. Pray God I will never apostatize but I can only now go to church as an act of duty and obedience ... (p. 562)

Alec, too, like Waugh, continued to go to Mass, but suffered from the liturgical changes: "Latin was far from my strong point at school," he wrote in My Name Escapes Me

, "and yet I miss its sonority in the essential and unchanging parts of the mass." Again: "I do think the Gloria in English is a mess in its present translation," he complained to Dame Felicitas. "It seems to me everything is back to front in the new mass." More than twenty years later, in 1987, after going to Mass at St. Laurence's in Petersfield on the Feast of Corpus Christi, he wrote:

My spirits sink so low I can hardly bring myself to the Communion rail. All my fault I know -- but my whole being winces at the congregation intoning introits, etc. in dull English, slowly and badly -- and the reading of the Epistle in a plummy voice, ill phrased and muddled, is a mortification I don't think I can stand any longer. (p. 563)

(Note, however, that he still had the Communion rail!) One of my favorite remarks by Alec Guinness about post-Conciliar liturgical innovations is that found in Pearce's book, Literary Converts: Spiritual Inspiration in an Age of Unbelief

Much water has flown under the Tiber's bridges, carrying away splendor and mystery from Rome since the Pontificate of Pius XII.... [T]he banalities and translations which have ousted the sonerous Latin and Greek are of a supermarket quality which is quite unacceptable. Hand shaking and embarrassed smiles or smirks have replaced the older courtesies: kneeling is out, queuing is in, and the general tone is like BBC radio broadcast for tiny tots....

Nevertheless, despite such sentiments, Alec and his wife remained devoted Catholics the rest of their lives. In the last chapter of his last book, A Positively Final Appearance: A Journal: 1996-1998

If I have one regret (leaving aside a thousand failings as a person, husband, grandfather, great-grandfather and friend -- and my lazy, slapdash, selfish attitude as an actor) it would be that I didn't take the decision to become a Catholic in my early twenties. That would have sorted out a lot of my life and sweetened it. (p. 560)

Related: David Thomas, "Sorry Alec, I couldn't let you off the hook" (The Telegraph, October 7, 2003).
Posted by Pertinacious Papist at 1:18 PM
Email ThisBlogThis!Share to TwitterShare to FacebookShare to Pinterest