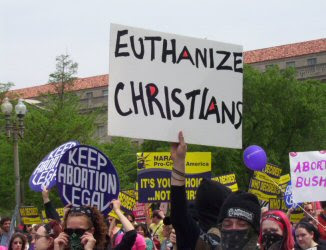 The link to this the following Reuters article by Carey Gillam at Yahoo News came to me from my son, Jonathan, in Knoxville, who writes: "I like the comment about women being able to see the 4-d x-rays of the baby, showing them that the 'collection of cells' is complete with a face, heartbeat, etc., making it HUMAN." According to Gillam's article, the champion of kill-your-own-baby rights seem to be in something of a panic:

KANSAS CITY, Missouri (Reuters) -- In Wichita, Kansas, abortion rights supporters held a "chili for choice" fund-raising dinner. In Pierre, South Dakota, they plotted strategy in the "Back Alley" meeting hall. And in Minneapolis, volunteers led women past protesters into an abortion clinic.

It was just a typical week in Middle America where the decades-old debate over abortion rights has become a full-blown battle. But even as they continue to raise money and march around state capitols, the view from the pro-choice side is this is a fight they are losing.

... The pro-choice groups find themselves facing a virtual avalanche of state legislation that ranges from laws banning abortions in almost all circumstances to laws limiting the disbursement of birth control and restricting sex education.

Anti-abortion groups say much has changed in the 33 years since the famed U.S. Supreme Court decision in Roe V. Wade cleared the way for legalized abortion. They acknowledge the increased power of religious conservatives in public policy, but say other factors are central to the rise of anti-abortion legislation and what they say is waning public support for abortion.

Among the key factors is enhanced technology, such as 4-D ultra-sound, that allows pregnant women to clearly view the features of the fetus they might abort.

"The technology has allowed someone who before had no face and no voice to become an actual child," said Mary Spaulding Balch, director of state legislation for the National Right to Life Committee. "In the 70s and 80s whenever you debated abortion you talked about the mother. Now the baby is being brought into the debate."

I did sense something different in the air at this year's March for Life in Washington, DC, this January 23rd. After three decades of killing 4000 babies/day in these United States alone, there was a sense -- just a personal sense ... something I picked up from things I read in the papers -- that something else might actually be possible. What ... sanity? ... In this country??? I'm not holding my breath, but I'm far from saying anything is hopeless.