"I will go in unto the Altar of God
To God, Who giveth joy to my youth"
Tridentine Community News by Alex Begin (April 26, 2015):

Not every Catholic worship site is a full-fledged parish. Most of us are aware of chapels in schools and universities, including our own Academy of the Sacred Heart Chapel. Some shrine churches are not parishes, for example St. Albertus Church and the Divine Mercy Center in the Archdiocese of Detroit, and the Shrine of St. Joseph in St. Louis, Missouri. There are also non-parish churches located in office districts which exist to serve local workers, such as St. Peter’s in the Loop, Chicago (http://www.stpetersloop.org). Along these lines, some of the Catholic world’s better kept secrets are chapels improbably located inside of office buildings, a few examples of which follow:

Ave Maria Chapel at Domino’s Farms, Ann Arbor: Inside the sprawling Frank Lloyd Wright-inspired Domino’s Farms complex, adjacent to the studios of WDEO-AM, is a chapel where Mass is offered four times each day. One of landlord Tom Monaghan’s many Catholic projects, the chapel originally served the employees of Domino’s as well as the once-nearby Ave Maria University. Today it is open to all. Confessions are offered there, and it is not uncommon to see students from the University of Michigan lined up in the corridor of the office building awaiting their turn. (http://www.dominosfarms.com/amuchapel/) TACOM Chapel, Warren, Michigan: St. Hyacinth Church Tridentine Mass organizer Mike Smigielski supplied us with this photo of a chapel inside the tank plant, where Holy Mass is offered on Wednesdays. It’s not entirely clear how or why this chapel was established, but a dedicated team of volunteers keeps it running. The TACOM Chapel is not open to the public. 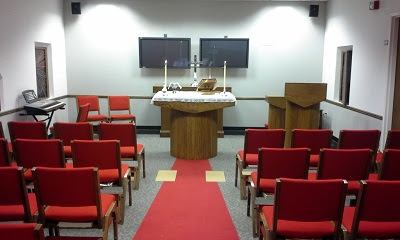 St. Francis Chapel, Boston: Perhaps the busiest office building chapel in North America, this one is located in a retail storefront on the ground floor of the enormous Prudential Center office tower and mall. It is open for daily Mass, Confessions, and adoration. (http://www.stfrancischapel.org/en/) 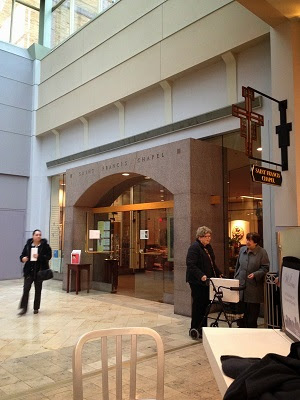 Queen of Life Chapel, Irvine, California: One of many outside-the-box projects of attorney, hotelier, and Catholic philanthropist Tim Busch, this chapel is located inside Busch’s law firm. Originally holding one Mass per week on Thursdays at 11:50 AM, the chapel now hosts Mass Monday-Friday, weekly Adoration, and even an Anglican Use community on Sundays. It is open to the public. (http://www.queenoflifechapel.org/)

You might be wondering: Do any such chapels offer the Traditional Latin Mass? That’s hard to know, given that many of these chapels don’t make much of an attempt to publicize their existence. However this writer can testify to the existence of one such chapel: In the early 1990s, on the lower level of the Arco Tower in downtown Los Angeles, the St. Bernardine Chapel was the location of one of L.A.’s then-indult Tridentine Masses, in addition to hosting weekday Masses in the Ordinary Form. The St. Bernardine Chapel closed later in the decade, most likely due to the high rents in the district.