On "going forward" or "going back"

“It was quite a courageous gesture of the Church to draw closer to the people of God so that they can understand well what she is doing. It is important for us to follow the Mass like this. One cannot go back. We have always to go forward, always forward. Who goes back is wrong. Let us go forward on this path.” - Pope Francis

"What earlier generations held as sacred, remains sacred and great for us too, and it cannot be all of a sudden entirely forbidden or even considered harmful. It behooves all of us to preserve the riches which have developed in the Church’s faith and prayer, and to give them their proper place." - Pope Benedict XVI

Jesus Christ does not simply call us to 'go forward', marching on blindly. He ceaselessly calls us back to Him. Repentance means turning around. We can go forward quite happily and unhappily leave Jesus Christ behind.... 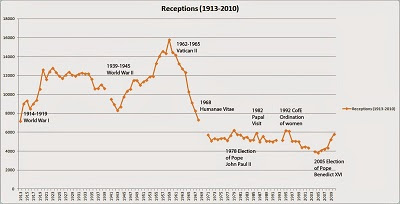 Numerous statistics have been made available over time, not least by the Latin Mass Society that show a certain trend that does not lend greater credibility to the post-Concilliar Church as a resounding success.

And why, exactly, should Catholics, Popes, Bishops and Cardinals, or priests, have an irrational fear of the past, of the tradition of the Church? Why such fear and loathing of our heritage?

... Why is it that the spectre of the traditional Latin Mass is one that haunts so many prelates and brings them out in a sweat? What, exactly, is so offensive about the Latin tongue in the liturgy? What is so terrifying about Mass being celebrated Ad Orientem? No reasons are given, just a kind of psychological 'we mustn't go there' response that any psychotherapist could tell you means you have deep-rooted problems with accepting your past, as if the Latin Mass was some kind of horrendous ecclesiastical inflicted trauma visited upon the Church's children by brutalising, callous parents.

hanks to Benedict XVI, more and more young people, as well as older people, are able to enjoy the liturgical riches of the Traditional Latin Mass. This mission to restore the sacred to the liturgy is being taken up by more and more priests and Bishops as well. This is not a threat to the Church - this is about giving God the glory that is His right and permitting, out of love, the Faithful to seek the Lord in the Mass offered by the Church for 1,500 years or more. This has seen a renewal of the desire for holiness, a thirst for a relationship with Jesus Christ, an increase in vocations in those Orders that embrace it and a real sense of love for the Church as well as fidelity to Her infallible teachings.

"Who goes back is wrong", says His Holiness.

Going back isn't wrong if you are going in the wrong direction. I am only a layman but it seems obvious to me that the Hierarchy must be mature enough to admit that there are paths the Church has taken which have not led to an improvement in catechesis, that have not led to the fulfillment of those ambitious spiritual goals set out by the Second Vatican Council. These words of Pope Francis will have a chilling effect in parts of the Church. It sends out quite a signal to bishops who wish to clamp down upon clergy who celebrate the Mass of Ages. It is, finally, saddening to look at Pope Francis's words and to see that the 'wisdom' of Benedict XVI which he himself has praised openly does not extend to the wisdom the Pope Emeritus showed in bringing forth treasures both old and new in the Church's liturgy. There is an oblique criticism of the Pope Emeritus within the words of his Successor that rip to shreds the hermeneutic of continuity that he sought to restore. More and more Catholics today look at the Church and say, about many things, Benedict XVI was right.