"Abp Luigi Negri: Western Civilization is at an end" 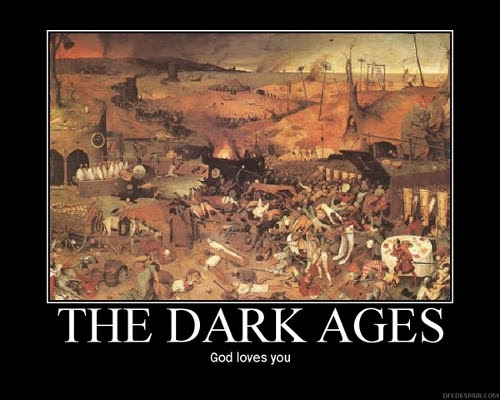 He puts the end of Western Civilization in the Museum of Mosul, where ISIS thugs destroyed timeless treasures, blowing up places of worship, and burning libraries.

I would have put it in the 2008 election of Barack Hussein Obama as President of the United States; but that's a detail. Western Civilization has been in decline since the Endarkenment, better known as the so-called "Enlightenment."

There were many milestones along the way, as there will doubtless be others. But we have for some time now been well into a new Dark Ages far more bleak that those following the "Fall of Rome" in AD 476. We just haven't quite realized it yet.
Posted by Pertinacious Papist at 6:03 PM
Email ThisBlogThis!Share to TwitterShare to FacebookShare to Pinterest
Labels: Eschatology, History, People, Politics

When talking about the end of 'Western Civilization', we must clarify some terms. If we mean the Western manifestation of the Traditional ideal, then the end began at the beginning of the 'Enlightenment' and ended in WWI, where the last vestiges of Tradition were well and truly scrubbed from the Occidental continent. Misguided reboots backfired and failed in WWII, and our societies have been in a severe, terminal decline ever since.

I would say since the final victories of feminism, secularism, and now homophilia in the popular culture in the mid-90s to 2000s, we have entered what I would call the 'pitch black period' which is the darkest depth of the Kali Yuga, where conservatism ceases to exist as an ideological force and there is nothing left except the liberal elite and the promise of the insurgent Reactionary who plots his downfall.

Mark, Thanks for your thoughts. The more carefully we define terms, the murkier things could end up being. What do we mean by "Western"? Is that a geographical term? If so, is it the province of more that the Western hemisphere? Obviously. So that's not too helpful. Is it political? But then a shipment of goods from Tokyo to Prague in the 1970s would have been a shipment from a "Western"-style democracy to an "Eastern"-bloc Soviet satellite. Not to helpful either. Harold Berman's answer was that the "West" most properly is identified with the rise of the Papal State, particularly under Gregory VII, and also circumscribes "Christendom," which was pretty much falling apart with the rise of modern nation states. Berman called our contemporary society "post-Western," in a chronological redefinition of the term.

All interesting stuff, no doubt. No matter how we slice it, however, we are clearly in a post-Christian, post-Catholic decline, whether it's a temporary cycle of history or permanent free-fall till the eschaton.