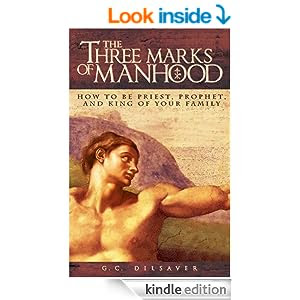 G.C. Dilsaver is the author of the fine book, The Three Marks of Manhood,

(2010) with an Appendix on "Mutual Submission," which, according on one reader, "respectfully takes Pope John Paul to task for what he considers a failure to correctly exegete the Epistle to the Ephesians.

Dilsaver also has a fine earlier study entitled "Karol Wojtyla and the Patriarchal Hierarchy of the Family: His Exegetical Comment on Ephesians 5:21-33 and Genesis 3:16" (Christian Order, June/July, 2002), which I just came across today.

I know this issue is now considered "controversial," largely as a result of the feminist movement since the 1970s (rather than new exegetical discoveries, I would argue). Interesting, to say the least.

If you're looking ahead for birthday or Christmas gifts for appropriate friends and acquaintances, you might consider Dilsaver's gem along with Steven Goldberg's 1971 classic, The Inevitability of Patriarchy: Why the Biological Difference Between Men and Women Always Produces Male Domination.

On women's issues, I love Michael Voris' brief editorials which temporarily transport me into the
Church I once knew. Unfortunately he never notices the elephant in the room, which ensures that we will never go back. Gaudium et spes mentions women twice. Once to assert that society demands that the equality of women be recognized in law and in fact. Again to assert that women have the right to stay at home with small children and that this in no
way should preclude the social progress of women.

John Paul II murdered wifely submission in both TOB and in Mulieris Dignitatem by actually implying that the NT pastoral passages that simply implied obedience ordinarily ...were the "old way" of the OT. But let's be real about it, John Paul existed within a clergy group think whereby wifely obedience is not mentioned once in the sections of either Vatican II or the catechism that are about family.
In short the NT mandates wifely obedience six times and it is nowhere in either Vatican II or in the catechism. LOL but Humanae Vitae was prophetic that contraception would cause divorce while the Church documents ignored a cause of divorce that the Holy Spirit repeated six times to little avail.
you can't make this stuff up. Good to see someone risked publishing a book on this.

Wow! This takes guts to post. I think it hits far more sensitive and deeply implanted AmChurch nerves than even radioactive items like The Latin Mass, Inerrancy, The Scandal of Particularity. Thank you.

Dr. Dilsaver just spoke at our Seattle Archdiocese Youth Conference called Ignite Your Torch,. He gave three talks on Celebrating Gender Distinction in the Age of Gendercide. Wow! the good doctor ignited some torches alright! The burning question: will he be invited back? I and my friends hope so but fear that bridge may be burned. Sadly the message is probably too hot to handle, too Catholic for Seattle, at least for the oh so cool adult leaders.