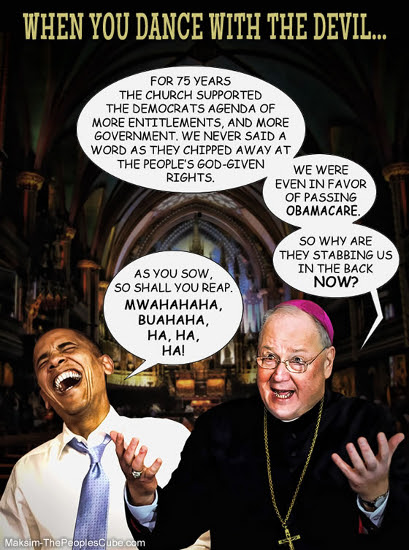 Two Levels of Neo-Cath Cluelessness Represented in This Silly Cartoon:

(1) that of Ab Dolan, pudgy and puffing, career USCCB factotum -- more a lobbyist than a man of the Church -- totally inadequate to the task of defending the Church against the world his V2 forebears were so twitchy to embrace (after all, how does one go about defending a position that is fundamentally incoherent?).

(2) that of the snarky author of this laff riot, whose words fill Dolan's cartoon balloon, and reveal him to be less a Catholic than an Ann Coulter-style spin artist who, if Catholic, is a factotum of the Mark Shea variety. Seventy five years ago the country was in the grip of the Great Depression. Back then Republicans may have pointed to the fellow selling junk from a wheelbarrow as an exemplar of The Entrepreneurial Zeal This Country Needs, but no one was listening, including Catholics.

The problem with the Church is not that it has backed republicans or democrats, but that it has deep-sixed Leo XIII along with the rest of its pre-V2 self. American capitalism requires the silly putty Christianity of protestantism to provide a patina of religiosity. It is fundamentally at odds with the genuine article, and neither Dolan nor the author of this cartoon is ready to face that fact.

Rerum Novarum not only touts labor unions, seeing them as akin to medieval guilds, but posits a role for the state in protecting the poor and workers. Government policies intended to prevent or ameliorate the effects of rapaciousness, which surely abounds in America, are entirely in line with Catholic social teaching. Thus, I would vote for BO but for his support of intrinsic evil in the form of abortion and homosexuality.

My answer to the Catholic "voter quandary" would be close to that of Michael Voris in this unusually nuanced episode of The Vortex.

Further, it's important to track how parties and social institutions have changed since the 19th Century. The political parties are not now what they were even in 1960. Their roles have in some ways flip-flopped, even if the Dems have retained a rhetoric with the patina of concern for working men and women and the GOP has retained a pro-business vocabulary. Even labor unions are not now what they were in the days of the Truman Democrats.

Christopher Ferrara's book, The Church and the Libertarian does a fine job of sorting through the proper role of government in protecting the poor and workers, and the vast difference from this of the on-the-street realities of contemporary Dem. alliances in Wall Street and in Big Business. Check out his chapter on the economic collapse of 2008. It's quite telling.

But Voris is right about what needs to be done if the Romney-Ryan ticked happens to win. That should properly be viewed, if it happens, as only the first tag-end of a beginning to the sort of reconstruction required in order to have an adequately informed "Catholic voting block," which we have not had for a generation or more. Too many Catholics still think of themselves as Truman Democrats, but those days are long gone.


You are right, PP. The American labor union has probably never resembled a medieval guild -- a Cosa Nostra family, maybe, but not a medieval guild. The reasons for this failure probably have to do with the differences between the larger social-economic structures of medievalism on the one hand, and American capitalism on the other. Leo XIII was suspicious of the American system on a number of grounds. Unfortunately, the V2 fathers bet their whole wad on American-style liberal democracy.

None of the above should be taken as an endorsement of some kind of government-driven socialist dystopia, such as President Black Jesus has in mind for us. I have some firsthand knowledge of how government-driven "compassion" works, in that I know people who are trapped in its mire. Their interpretation of what is happening to them can be paraphrased as follows: "they do everything backwards; they put us through a maze of regulations which do not give us a way of climbing out of poverty, but rather push us down to the bottom of the ladder everytime we manage to climb up a few rungs; they WANT us to fail."

Of course, if there were no class of permanently downtrodden individuals in need of assistance, there would be no need of a bloated welfare bureaucracy, and no basis for the corruption of public sector careerism. Why would a nebbish who gets paid well with other peoples' money for depersonalizing and brutalizing other people want anything to change?

Americans are caught between the shameless rapacity of international corporations and banks on the one hand, and the bottomless corruption of public sector officialdom on the other. The secret is that these two opposed jaws operate as part of the same vise.

To be quite honest about it, the leaders of the Roman Catholic Church in America are absolutely clueless over what to do about any of this (and in many cases absolutely disinterested in doing ANYTHING about it). There is no identifiably Catholic leadership, hence there is no identifiably Catholic voting bloc. Instead, there are sporadic spasms of single issue controversies, such as abortion, and lately, "religious freedom."

Oops, which brings us back to Leo XIII.