In addition to our Church traditions and liturgical seasons, there are secular traditions worth remembering for their original purpose and meaning. Some of these are being rapidly eclipsed, like everything else, by our consumerist culture that tends to overwhelm the psyche and erode long memories by its tyrannical volume and immediacy.

Lest we forget, during these post-Christian times, it bears repeating that our national Thanksgiving Day was established by Abraham Lincoln during the Civil War by means of a Proclamation on October 3, 1863, which read, in part:

"It has seemed to me fit and proper that God should be solemnly, reverently and gratefully acknowledged, as with one heart and one voice, by the whole American people." (emphasis added)

I doubt you have heard recently or will hear anytime soon such an unreserved call to national prayer from the White House. Yet it does us good when we see where we stand today in our place in history, to see from whence we've come, and how far we've fallen into oblivion of our dependence upon God as a nation. "In God we trust" says our coinage. If only that were true! But if it's not true nationally, it can at least be true for those of us as a believing counterculture.

The traditional story of that September in 1620, when a small wooden ship called the Mayflower sailed from England with 102 passengers and came to the New World, may be a Protestant story. Yet it remains a Christian story of a faith, which, however crippled by wounds from earlier historical schisms, owes its life to parentage traceable to common Apostolic stock. 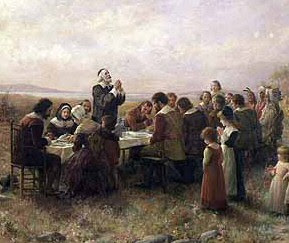 After sixty-five days at sea, those Pilgrims arrived in the New World, created a settlement and suffered through a bitter winter, whose freezing temperatures and diseases killed nearly half of their population. With the help of two English-speaking Indians, Samoset and Squanto, they planted crops of native corn and pumpkins and trapped and hunted game. By October of 1621, they were finally prepared to weather their second winter, which gave cause to their celebration of their first Thanksgiving Day with an impressive spread of venison, goose, lobster, vegetables, and assorted dried fruits, as well as roasted corn furnished by the Indians.

Let it be remembered, too, that they paused collectively to offer their thanks to God, who had so miraculously preserved them and blessed them with abundant stores and a new future and a hope. Let us as Catholics exhibit at least as much gratitude this year and thank God publicly for having preserved us yet another year, along with the freedoms we still enjoy, our families, our country, and our Church.
Posted by Pertinacious Papist at 9:11 PM
Email ThisBlogThis!Share to TwitterShare to FacebookShare to Pinterest
Labels: History, Holidays