Protestant converts and ironies among phenomenologists

We've all heard about the Catholic converts from among the ranks of the phenomenologists -- Edith Stein, Dietrich von Hildebrand, and (on a bit shakier ground) Max Scheler, etc. But how many of us have heard about the Protestant converts?

While in grad school, I had heard several rumors that the father of phenomenology, Edmund Husserl himself had converted to the Christian faith before his death, but no definite details. There was some mention about conversation between him and a nun on his deathbed. But these last details may have been apocryphal.

What I did discover last year, however, through a generous contact, was that Husserl had converted to the Lutheran faith; and it was hardly on his deathbed. Here is a quotation from an online Biography:

1886-7 was a pivotal year for Husserl. He moved to Halle, and studied psychology, writing his Habilitationsschrift, entitled, The Philosophy of Arithmetic. He converted to Christianity along with his fiancé and member of the Prossnitz Jewish community, Malvine Charlotte Steinschneider. They had three children together. (emphasis added)

Furthermore, on page 15 of a book titled Husserl-Chronik by Karl Schuhmann (Martinus Nijhoff, 1977), Husserl's baptism at a Lutheran church in Vienna is reported as having occurred on April 26, 1886:

Translation: "Husserl was baptized under the name of Edmund Gustav Albrecht Husserl in the town church of the evangelical Pfarr municipality of the Augsburg Confession in Vienna. Dr. Gustav Albrecht, a teacher at he Gymnasium in Maehrisch-Treubau, served as his godfather." 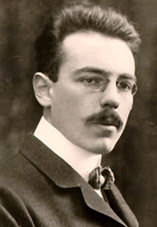 Another interesting conversion is that of Adolph Reinach (pictured left), a member of the phenomenological circle to which Husserl, Edith Stein, von Hildebrand, and Max Scheler belonged. He was of Jewish ancestry, but was apparently a lapsed Lutheran for most of his life (Evelyn Waugh called him an "apostate Lutheran" in his 1952 review of a biography of Edith Stein). However, he evidently returned to his Lutheran faith while in the army before he was killed in action. In another twist of Providence, his widow, Frau Reinach (who later became a Catholic), by the resignation and hope with which she accepted her husband's premature death, was instrumental in shedding significant light on the significance of the experience of the Christian faith for Edith Stein, who had agreed to organize Reinach's unpublished manuscripts.

Finally, as to ironies, Thomas S. Hibbs, in his splendid review of Alisdair MacIntyre's magisterial Edith Stein: A Philosophical Prologue 1913-1922 in First Things (May 2006), entitled "The Beginning of the Journey," notes how MacIntyre points out in his book the intriguing parallels and differences between Stein (pictured right) and Heidegger (below):

MacIntyre offers tantalizing comparisons of Stein and Heidegger, whose lives have intersecting but opposed trajectories. Heidegger began as a Catholic, studied with Husserl, abandoned Husserl to embark on a radical deconstruction of traditional metaphysics, and ended up an ally of the Third Reich. Edith Stein began as a practicing Jew, turned to atheism, studied with Husserl, struggled to move beyond the limitations she detected in Husserl’s phenomenology, became a Catholic, moved toward traditional metaphysics, and was executed by the Nazis at Auschwitz.

Simply amazing!
Posted by Pertinacious Papist at 3:23 PM
Email ThisBlogThis!Share to TwitterShare to FacebookShare to Pinterest