It was not so long ago that our local dioceses gave little or no thought to supporting local Latin Mass sites by making appropriate priest assignments. News from the last two weeks proves that this is no longer the case; assignments have been made that at least in part directly benefit Extraordinary Form communities, and for this we should be grateful to the respective dioceses’ priest assignment boards:

In the Archdiocese of Detroit: The new pastor of Immaculate Conception Parish in Lapeer will be Fr. Brian Hurley, who offered the Tridentine Mass at his previous parish of St. Anthony in Temperance. His interest directly coincides with that of Assistant Pastor Fr. Joe Tuskiewicz and will surely lead to an increasing prominence of the Traditional Mass in that parish’s life. Fr. Robert Slaton, another regional TLM celebrant, will be taking Fr. Hurley’s place as Administrator of St. Anthony, so the EF will surely continue there.

In the Diocese of London: Being moved to the Windsor area are four priests with an interest in the Traditional Mass: Fr. David Johnston, currently the celebrant of the First Friday EF Masses at St. Joseph Church in Sarnia, will be moving to Most Precious Blood Parish in Windsor. Fr. Danny Santos will be moving to Good Shepherd Parish in Lakeshore. Newly ordained Fr. Paul Kim will be assigned to St. Anne in Tecumseh. Fr. Tom Ferrera, formerly one of the celebrants of the TLM in St. Thomas, will become Administrator of St. Michael Parish in Leamington. The proximity of these priests should make it easier to arrange for substitute celebrants at St. Benedict.

The first Men’s Evening of Recollection hosted by the Oakland County Latin Mass Association will be held on Sunday, May 20 at the chapel at St. Elizabeth Briarbank in Bloomfield Hills from 6:30 PM – 9:00 PM. Msgr. Ronald Browne will present “The Blessed Mother, Blessed Solanus Casey, and Us.” There is no charge, but registration is requested. Sign-up forms are available on the information table outside the chapel entrance, or you may also e-mail info@oclma.org.

On Sunday, June 3, the celebrant of the 9:45 AM Oakland County Latin Mass Association Mass at the Academy of the Sacred Heart will be soon-to-be-ordained Fr. Graham Latimer of the Priestly Fraternity of St. Peter. It will be a Solemn High Mass; the Deacon will be Fr. Joshua Houck, FSSP, and the Subdeacon will be Msgr. Ronald Browne. Fr. Latimer’s family attends the OCLMA, and his cousins have served at the altar for the Tridentine Masses at Immaculate Conception, Lapeer and St. Matthew, Flint. A Eucharistic Procession for the Feast of Corpus Christi will follow the Mass. Fr. Latimer will give First Blessings afterwards, and a reception for the newly ordained priest will be held in the hall. 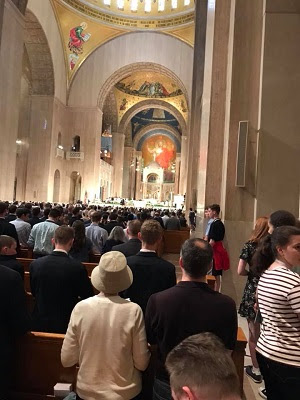 By varying accounts, Archbishop Alexander Sample’s April 28 Pontifical Solemn Mass in the Extraordinary Form at Washington, DC’s Basilica of the National Shrine of the Immaculate Conception drew between 2,500 – 4,000 attendees. Videos of the entire Mass and of His Excellency’s impressive homily noting the appeal of the Traditional Mass to youth may be viewed on YouTube.

Prior to Archbishop Sample’s Mass, the last Tridentine Mass in the Upper Church of the Shrine in DC had been in 2010. Since then semi-regular Low Masses and Missa Cantatas have been held in the Shrine’s lower level Lourdes Chapel.

However just a few weeks after this recent major event Mass there, another significant event has been scheduled: The Priestly Fraternity of St. Peter has announced that they will be holding a Solemn High Mass at the Shrine on Saturday, June 2. No location or time has been specified, but logic would suggest based on other events scheduled there that day is that it will be held in the Lower Church.

Tridentine Masses This Coming Week
Posted by Pertinacious Papist at 10:22 PM
Email ThisBlogThis!Share to TwitterShare to FacebookShare to Pinterest