"I will go in unto the Altar of God
To God, Who giveth joy to my youth"
Tridentine Community News by Alex Begin (December 3, 2017):

In recent weeks, Fr. Stephen Wolfe, SJ has become a regular sight at Tridentine Masses around our region. Ordained to the priesthood earlier this year, and having served his diaconal term at Boston’s Mary Immaculate of Lourdes Parish, a thriving center of traditional liturgy, Fr. Wolfe dispels the stereotype that Jesuits don’t care for the Extraordinary Form.

Fr. Wolfe has invited a Jesuit colleague, Fr. Cy Whitaker, to join our roster of celebrants. Next Sunday, December 10, Fr. Cy will celebrate his first local Missa Cantata, the 9:45 AM Mass of the Oakland County Latin Mass Association at the Academy of the Sacred Heart Chapel in Bloomfield Hills.

It’s worth noting some other Jesuits who celebrate the Traditional Mass: Fr. Joseph Fessio, the Editor of Ignatius Press; Fr. Kenneth Baker, who for 40 years served as editor of Homiletic and Pastoral Review; various young Jesuits at Miami’s historic Gesu Church; and at least until a few years ago, one or two Jesuits at the chapel of London, England’s Farm Street Church, where even the Novus Ordo Mass is done in Latin and with a professional choir. Let us pray that these priests’ enthusiasm catches on with their peers.

St. Anthony Church in Temperance, Michigan, will be expanding its Tridentine Mass offerings: Low Masses began to held every Thursday at 7:00 PM on November 30, and Low Masses are debuting every Sunday at 12:30 PM beginning today. These Masses join the existing 9:00 AM High Masses held on First Saturdays.

Next OCLMA Talk & Reception on December 10

Next Sunday, December 10, Erik Coules, Regional Coordinator with the Archdiocese of Detroit Department of Parish Life & Services, will give a talk, “Sharing Your Joyful Faith”, at the reception following the 9:45 AM Oakland County Latin Mass Association Mass at the Academy of the Sacred Heart Chapel in Bloomfield Hills.

Juventútem Michigan reports that Our Lady of the Scapular, Wyandotte is considering Masses on Tuesday, December 19 and Saturday, December 23, but plans have not yet been finalized.

Forms of the Tridentine Mass 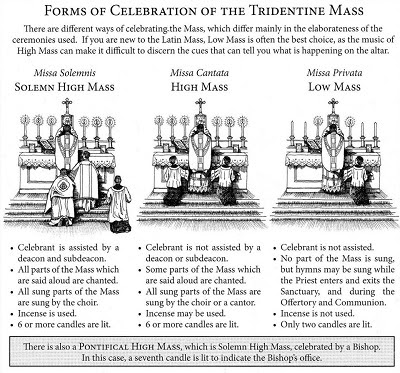 An interesting graphic excerpted from the book, Treasure and Tradition: The Ultimate Guide to the Latin Mass, has been published on-line. It explains the three basic forms of the Traditional Mass: Low, High / Missa Cantata, and Solemn High. One minor technical correction: At a Missa Cantata, four candles are permitted as well as six. Indeed, some churches, including St. Hyacinth, only possess four candles on their High Altar, and so one must make due.