Fr. James Martin, "bridges," and the triumph of the therapeutic mentality 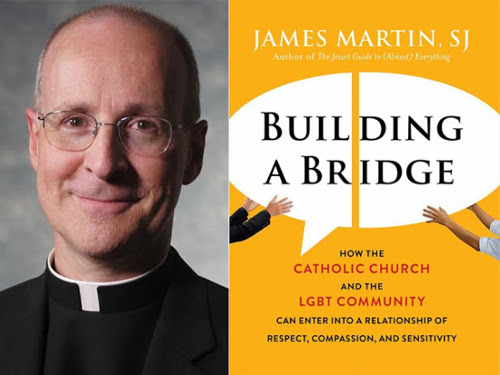 "One would think that in a book about human sexuality, an author writing from a Catholic perspective would identify the specific sexual struggles of the moral life in Christ as the sixth commandment bears upon them, and the corresponding sexual sins against chastity. But no, they receive no attention; they do not figure in this book at all."

Echeverria's article carries the following quote as a welcome caveat given the disposition of Fr. Martin's book:

“There is an organic connection between our spiritual life and the dogmas. Dogmas are lights along the path of faith; they illuminate it and make it secure. Conversely, if our life is upright, our intellect and heart will be open to welcome the light shed by the dogmas of faith” (CCC, no. 89).

He begins with definition:

By the therapeutic mentality I mean a subjectivist philosophy in which a feeling of well-being, feeling good about oneself, is the only, or dominant, criterion by which we measure what is acceptable or not to us. A good example of this mentality is found throughout the recent book by James Martin, SJ, Building a Bridge: How the Catholic Church and the LGBT Community can Enter into a Relationship of Respect, Compassion, and Sensitivity (New York: HarperOne, 2017; hereafter, BB).

The Catechism of the Catholic Church (no. 2357; hereafter, CCC) teaches: “Basing itself on Sacred Scripture, which presents homosexual acts as acts of grave depravity, tradition has always declared that ‘homosexual acts are intrinsically disordered’.” Fr. Martin doesn’t cite this passage. I’ll return to this matter below. All he cites is the phrase found in CCC that the homosexual inclination is “objectively disordered” (no. 2358). After this, we see the therapeutic mentality at work in the following remark. “The phrase relates to the orientation, not the person, but it is still needlessly hurtful. Saying that one of the deepest parts of a person—the part that gives and receives love—is ‘disordered’ in itself is needlessly cruel” (BB, 46-47).

Fr. Martin doesn’t say that the problem with this term is solely with the language used that otherwise correctly describes the homosexual condition. So, let’s just change the language to describe an expression of human brokenness as a consequence of man’s fallen state. He doesn’t consider whether the term is morally right about homosexual practice; or even whether it is, however inadequately, getting at the reality of the homosexual condition.

Rather, he only considers how the term leaves one feeling about himself, hurt or abused verbally. That’s it. Read more >>

Posted by Pertinacious Papist at 9:59 AM
Email ThisBlogThis!Share to TwitterShare to FacebookShare to Pinterest
Labels: Confusion, Dissent, Homosexualism, People