"I will go in unto the Altar of God
To God, Who giveth joy to my youth"
Tridentine Community News by Alex Begin (February 12, 2017):

“All the continuous tinkering in [the] name of Vatican II serves only to strengthen the movement & clamoring for the traditional Latin Mass.” – Fr. Kevin Cusick, Jan. 27, 2017

On January 11, 2017, Vatican journalist Sandro Magister reported that Pope Francis had instructed Archbishop Arthur Roche, Secretary of the Congregation for Divine Worship, to set up a commission to revisit the guidelines of Litúrgiam Authénticam, the 2001 instruction which established the criteria for translating the original Latin of the Ordinary Form into vernacular languages.

Widely seen as being representative of then-Cardinal Ratzinger’s thinking, this document required translations to be more faithful to the words and the meaning of the Latin. This was in contrast to the theory of “dynamic equivalence” which guided the original 1970 translation of the Ordinary Form. Those of us in English-speaking countries saw the fruits of this instruction with the new translation of the Ordinary Form Mass, introduced in 2011. One oft-cited example of the difference:

1970 excerpt from Eucharistic Prayer I: “When supper was ended, he took the cup…”.

2011 version: “In a similar way, when supper was ended, he took this precious chalice in His holy and venerable hands…”

It is now believed that Pope Francis will seek at least a partial return to the previous philosophy of translation. This development almost certainly puts the brakes on the current work to revise translations of other books and rites, such as the Ordinary Form Sacrament of Baptism. It raises a number of questions:

Will Catholics spiritually benefit from translations that are less faithful to the original Latin meaning?

How often can we expect translations to change? Who will pay for the new books that parishes will require? How will the faithful be expected to keep up?

How decentralized with the new translations become? Will, for example, Canada and the U.S. have different English translations established by their respective National Conferences of Bishops?

Will the global unity of Catholic faith and awareness of doctrine on the part of the faithful be impacted by the forthcoming changes and possible differences from country to country?

This writer believes that a not-small number of Catholics will tire of the repeated changes to Catholic worship and will find solace and refuge in the unchanging texts of the Traditional Latin Mass. Because there are no official vernacular translations of the Tridentine Mass, wording based on and similar to the hierarchical English of the Douay-Rheims Bible has long been the norm for hand missals and Propers handouts. Only a very small number of hand missals have attempted to use modern English, one example being the Maryknoll Missal. Even those still strive to employ reverent language.

While certainly not the preferred way to promote Sacred Tradition, Rome’s potential further tweaking of the Ordinary Form is more likely than not to strengthen the Extraordinary Form, so let’s not despair at the news, but instead look forward to the pleasant side effects it may very well bring. 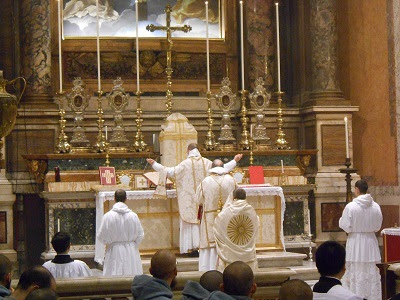 The traditional Dominican Rite has been getting quite of bit of press in recent years as it regains popularity in Dominican-run parishes and houses of formation. While similar to the Tridentine Mass, there are some notable differences, as seen in the adjacent photo by Gregory DiPippo of The New Liturgical Movement. At certain points in the Mass, such as during the Canon, the celebrant fully extends his hands. The altar servers wear albs instead of cassocks and surplices. A special Dominican Missal and book of chants are used.

Likewise, there is a Dominican version of the Rosary. It is traditionally believed that Our Lady revealed the prayer to St. Dominic. To this day, the Dominican Rosary is promoted in Dominican-run parishes. The differences are at the beginning and the end: The Rosary begins with the Sign of the Cross and the following: “Hail Mary, full of grace, the Lord is with Thee. Blessed art thou amongst women, and blessed is the fruit of thy womb, Jesus. O Lord, open my lips. And my tongue will proclaim Your praise. O God, come to my assistance. O Lord, make haste to help me. Glory be to the Father, and to the Son, and to the Holy Spirit. As it was in the beginning, is now, and will be forever. Amen. Alleluia. [During Lent, ‘Praise be to you, O Lord, King of eternal glory.’]” The Apostles’ Creed and the initial Our Father, three Hail Marys, and Glory Be are omitted. The decades then begin as usual.

At the end, “Pray for us, O holy Mother of God” is replaced by “Queen of the Most Holy Rosary, pray for us.” At the very end is added: “May the divine assistance remain always with us. May the souls of the faithful departed through the mercy of God rest in peace. Amen.”