Doubtless you've heard about how Salma Hayek, Richard Gere, and George Clooney were feted and awarted with medals by Pope Francis recently to promote the work of a foundation inspired by the pontiff, Scholas Occurrentes. "Important values can be transmitted by celebrities," said one of the organizers, Lorena Bianchetti. There's a short video from the event at this site.

Now comes the intrepid Amateur Brain Surgeon, founder of ABE Ministries, with balm for the wounds of wounded conservative and traditionalist Catholic souls. First, from a book entitled Shepherd of Souls: A Pictorial Life of Pope Pius XII, he points to a page showing how Pius XII was a movie buff, a fan of Clark Gable, and, writes the author:

When the movie King of Hollywood, his wife and daughter were granted a private audience, the subsequent callers were kept waiting in the reception hall for two hours. When Clark Gable's visit ended, Bishop Angelo Giuseppe Roncalli followed. This bishop is now known as Pope John XXIII. 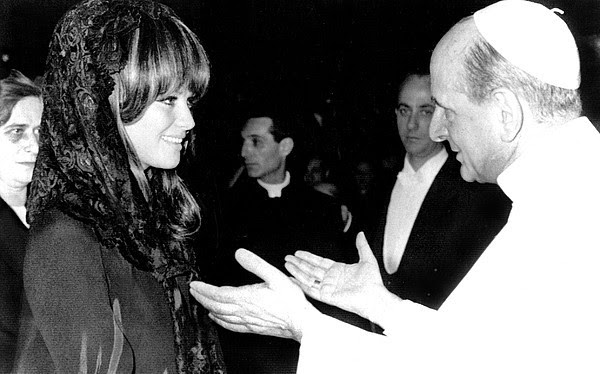 Finally, from the May 9, 1967 issue of the Sydney Morning Herald, ABS quotes from an article with a banner photo of Pope Paul with his arms outstretched to welcome actress Claudia Cardinale at a special audience to mark World Social Communications Media Day. The article says:

Claudia Cardinale worse a mini-skirt, Gina Lollobrigida braved her critics, but Sophia Loren couldn't make it to an unprecedented meeting between Pope Paul VI and the world of showbiz yesterday.

... the film stars stole the show -- even from the Pope himself, who was garmented in dazzling white robes.

Claudia was the first to bring gasps when she walked to her seat near the Pope's throne wearing her mini-little black dress.

Miss Cardinale recently married outside Italy a man who is not the father of her son, born when she was unmarried.

The Church forgave her early sins, but not her marriage to a man the Church considers to be still married to his first wife.

Then came Lollobrigida, who, at first, stood in a small crowd and then was escorted to a chair in a reserved section immediately facing the Throne.

On the way a bearded Swiss Guard stopped her, but a horrified officer reprimanded the Guard with: "Obviously, you don't go to the cinema."

Miss Lollobrigida was recently acquitted of an obscenity charge brought over a falling towel scene in her latest film.

But she has also earned the Church's disapproval because of her legal separation from her husband, Milko Skofic.

... But Miss Loren, who has been embroiled for years in an alleged bigamy case over her marriage to producer Carlo Ponti, disappointed the crowd by preferring to continue work on a film, although invited.

Thanks for the increased traffic, Doc.

You know how head-shakinginly strange it is to hear Donald Trump; We are going to be winning so much, you are all going to get sick of winning and ask me if we can stop winning so much...

My sole wish in life (other than to never camp out or be forced listen to 1960s French rock 'n roll) is to hear Franciscus say: I have been bringing you so much continuity that I fear you may get sick of it and ask me to stop with all of the continuity but I won't do that; in fact, I just changed the name of The Sistine Chapel Choir to Herman and the Hermeneutics.

His holiness Pope Fillintheblank, desires to meet and discuss genuine spiritual concerns with Hollywood actors, actresses, and similar celebrities and pop stars -- as he does with all properly motivated souls. Because all such concerns are presumed to be serious and genuine, and not at all frivolous, the pope believes that the privacy of such meetings should be protected at all costs. Therefore, public greetings will henceforth be discontinued. Pope Fillintheblank earnestly entreats all interested media celebrities to contact the Vatican to arrange private meetings with no media distractions.

I like to think that Paul VI was dazzled by Sophia Loren's beauty, one Italian by another. Was Jesus equally dazzled by some the women in the Gospels? Is that not a fitting tribute to those that God has created beautiful?

There are different ways of being 'dazzled', some prurient and others innocent.