Fr. Roger-Thomas Calmel, O.P. (1914-1975), was a prominent French Dominican and Thomist philosopher, who made an immense contribution to the fight for Catholic Tradition through his writings and conferences. Here is a video interview with his Dominican biographer, Père Jean-Dominique Fabre, O.P. 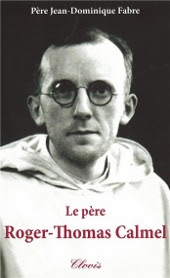 This interview is most encouraging thing I have read for a long time. He has set my faith back on course when the antics at home and in Rome are undermining the faith of my childhood.
I am no longer fearful of the future. I put my trust in God and His holy Catholic Church which will never be destroyed by the haters of tradition. Thank you very much.

What little I read here is tremendously moving, but my French is now limited to a few words and phrases, definitely inadequate to follow this interview. Is there anywhere I might find an English sub-title or better, a script in English of the interview? Have been looking on the internet and while there are editions of Pere Fabre's biography of Pere Calmel, and one of two of Pere Calmel's books available, apparently they are limited to French with no English translations to date. Any help here?

Not much in English, I'm afraid.

Take a few months and learn the French. Certainly worth it. If you don't have to worry about pronouncing it, it's not that hard. Good luck.