Light on the Argentine ethos of José Bergoglio, his background, and rise to prominence. 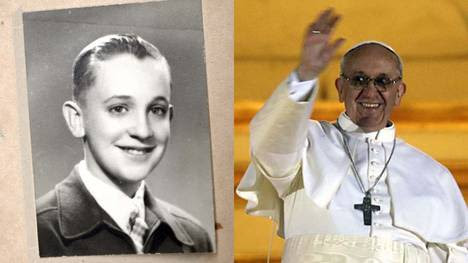 Boniface, over at Unam Sanctam Catholicam, offers an interesting retrospective on the election of José Bergoglio as our current Pope Francis, with links to (1) an article he did at the time entitled "First Impressions" upon his elections, which is as engaging for the comments following the article as it is for the article itself; and (2) an article entitled "Who is Pope Francis?" [PDF] by Jack Tollers, an Argentine traditionalist who contacted Boniface at the time, and who compiled this "anguished essay" on Bergoglio in light of the culture of Argentina, which he calls a "make believe country." Toward the end of his article, Tollers says of José Bergoglio that "he's the perfect example of an Argentine, Peronist, Jesuit of the second half of the Twentieth Century."

Then, this observation from Guy Noir, who sent me the Boniface link:

I am convinced JPII and Benedict XVI were/are godly men, smart men, and nobly-intentioned ones (Francis too). And I am increasingly convinced they were /are tragic ones, in that they believed in and wanted to maintain the Deposit of Faith, but also were unwilling to endure uncomfortable dissonance with the modern ideas they assumed to be givens, or maybe even to entertain the idea that the Gospel and world happiness might be mutually exclusive in certain eras. Witness youth unemployment as the primary concern of a pontiff. And hence they bequeathed to us the rapid disintegrating reality of a Church that wants to proclaim absolutes but is absolutely uncomfortable with antagonizing the world. Pretty much anything seems preferable to having to endure the thought of being caricatured as Mean Old Men. When by the World's standards, that is how they should see the hierarchy!

Posted by Pertinacious Papist at 11:27 AM
Email ThisBlogThis!Share to TwitterShare to FacebookShare to Pinterest
Labels: Church and society, Church history, People, Pope Francis, State of the Church

and also part XI by Mr. Larson is quite comforting regarding the recent Popes and what it all means.

What Mr. Larson had to say about Peter was, for MJ, really eye-opening and it helped him to see how Popes can not be heretics nor can they be disposed.

As one who, routinely, labels Kasper a heretic (Well,he is, isn't he?) MJ had better go to Confession this afternoon and try and dial back the anger as his generation has not been remote from the cause of the chastisement of His Church.

I should say that I passed the Tollers PDF by a personal friend who grew up in Argentina, whom I visited in Argentina once, and he begs to differ with the author on the issue of educational quality in Argentina. He thinks the author sounds a tad "disgruntled" and he also said he thinks the "Peronist" label is a bit wide of the mark, though one would have to consider the whole picture.

Pray for the converstion of the Pope.