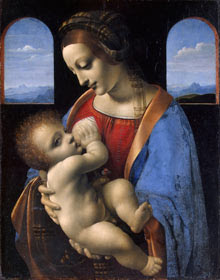 Really, you have to smile or laugh.

The reader who sent this link told me that he was compelled to create a Twitter account today, which was quite eye-opening. Within two hours, he said, he had 50 "followers."

"So all these people are BOMBARDED by one liners all day long? A torrent of thought blasts? It does not take a curmudgeon to point out that people so pelted really can't have much deep thought going on, since they are simply plastered with platitudes and messaging. It's sort of patently obvious," he writes; then adds:

Reading the breast feeding thing, I simply think the Vatican right now is probably perfectly in sync with the Twitter generation. It all seems a comical episode of majoring on minors. "Let them drink milk!" We ... could ... not ... script a better SL skit if we tried! Really, I am simply now laughing. And for once, I think maybe we are actually AHEAD of the silly Protestants. I await the Episcopal Church's suggestion we hold a joint synod on thew Plight of Breastfeeding Mothers, and the resultant appeal for a government grant to launch a educational initiative to help!

[Hat tip to JM]
Posted by Pertinacious Papist at 9:33 AM
Email ThisBlogThis!Share to TwitterShare to FacebookShare to Pinterest
Labels: Humor, Pope Francis, Popular culture, State of the Church

I do, however, think that modest breastfeeding should be CULTURALLY sanctioned, without recourse to a broken system of legal positivism.

This change in cultural mores might have some very positive ripples spreading from it:

Chris: Agreed. Good points. Without prejudice to the point made by the posted quote that there has been a tendency to major on minors, and it would be nice to see Pope Francis directly take on the major threats to faith and morals faced by Catholics today, rather than simply side-step them with happy talk, leaving the pew peasants to fend for themselves.

I certainly wouldn't quibble with you on substance.

Is it possible -- maybe even likely? -- that Pope Francis is hitting these "bunts", if you will, because the people he's trying to rescue can't focus on any of those major moral threats because they don't have the vocabulary to identify that a problem exists, or to hear one identified by someone else. After all: how many of our average Catholic brethren (to say nothing of the 10% of Americans who are former-Catholics) recognize the illogicality of their stated opinions--- "I'm Catholic and pro-choice", for example.

Perhaps (again, it's a big perhaps, since the Holy Father doesn't check with me before speaking) His Holiness is upsetting some loyal sons and daughters of the Church because they don't like to admit that God, who is merciful, doesn't say: go, and keep sinning; but, go, and sin no more; and, the father of the prodigal son killed the fatted calf!

There are plenty of icons of Mary breastfeeding Jesus in Catholic churches...so why not real breastfeeding? And its not like the Sistine Chapel doesn't have naked people all over the ceiling.