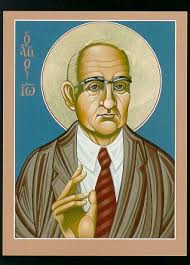 Okay, I think someone may have gone just a wee bit too far with this "proto-canonizing" von Balthasar!

We've seen the problems with his inordinate fascination with Adrienne von Speyr, not to mention his overweening aestheticism, and quasi-universalism. And now here comes a post by Daniel Klimek on the mysticism of von Balthasar and his fascination with Medjugorje. Read the whole thing and be edified. Here's an excerpt:

Theologically von Balthasar had much in common with Popes John Paul II and Benedict XVI, being a champion of Christian orthodoxy. As MinistryValues has observed in a previous article, John Paul II, like von Balthasar, was also infatuated with Medjugorje. Von Balthasar, however, did not only comment on the subject in his expertise as a Catholic theologian but also in his role as archbishop. Noticing the fruits of faith in Medjugorje, he strongly defended the visionaries and the apparitions against unsubstantiated attacks.

When Bishop Paveo Zanic, who had a notorious reputation for hostility toward the visionaries and devotions of Medjugorje, issued a letter condemning the site and attacking the visionaries, Archbishop von Balthasar responded with his own letter to Zanic. He wrote:

“What a simply sad document you have dispatched throughout the world! I was deeply hurt to see the office of Bishop degraded in this fashion. Instead of having patience as You were advised by Your superiors, You thunder and hurl jupiter’s arrows, blackening renowned and innocent people, worthy of Your respect and protection. You repeatedly come up with accusations which have been proven untrue a hundred times over.”

A couple of such accusations included Bishop Zanic’s claim that the Medjugorje visionaries are guilty of fraud and hysteria. Even Archbishop Frane Franic of Split noted that such erroneous accusations ignored the findings of separate teams of Yugoslav, French, and Italian doctors who thoroughly examined the visionaries, in ecstasy, and found no evidence of fraud or hysteria whatsoever.

Balthasar’s love for the mysticism of Medjugorje, and his confidence in the truth of Our Lady’s messages reported there, were abundant. He always had a spiritual inclination toward the mystical. Among the things he was most known for, in addition to his esteemed role as theologian and Archbishop, was directing the conversion of the Swiss mystic Adrienne von Speyr into the Catholic Church. Speyr, a medical doctor, wife, and the author of over 60 books on spirituality and theology, grew up in a Reformed Protestant family before her spiritual life led her to Roman Catholicism. In the tradition of Teresa of Avila and Simone Weil, she experienced profound spiritual phenomena throughout her life, including mystical experiences of the Trinity and the saints. In 1940 she was introduced to Fr. Hans Urs von Balthasar, then a young Jesuit priest. Von Balthasar became her friend and spiritual director, to whom von Speyr dictated a total of 69 of her books while in a state of mystical prayer. Von Balthasar would pay homage to his friend and spiritual student, by publishing, among his numerous books, the biography First Glance at Adrienne von Speyr, a detailed introduction of her life, theology, and work. Interestingly, even as a young priest, von Balthasar’s sense of the mystical was important in discerning the fruits and messages of God’s supernatural graces.

Objective facts, anyone? Ex opere operato? The real world out side of Lewis Carroll's rabbit hole?

[Hat tip to G.M.]
Posted by Pertinacious Papist at 12:36 PM
Email ThisBlogThis!Share to TwitterShare to FacebookShare to Pinterest
Labels: People, Spirituality, State of the Church, Theology

HvB resorted to the same sort of overly-defensiveposturing when answering the critics of his quasi-universalism. He resorted to scolding those he decried for scolding him. He has some very helpful stuff, but he most certainly has his baggage as well. I don't know if the wild enthusiasm for him is the result of a theological vacuum, the Emperor's New Clothes, or something there I simply cannot see, R R Reno's recent essays on him are pretty helpful.

I was certainly beginning to get mixed signals under the pontificate of JP2, who appeared to want to canonize anything that moved and happened to have been sprinkled with holy water, and is now himself about to be canonized, along with John 23rd.

Just as there is grade inflation, and "No student left behind," there seems to be an attitude abroad that almost nobody should be prevented from becoming a canonized saint of the church and placed into the liturgical calendar. The Feast Day of St. Hans Urs von Balthasar? Lord forgive me, but I hope not. Not in this life. Or we shall soon be canonizing notorious philanderers as well, just because they were well-meaning Catholics. The Feast Day of St. Edward Kennedy? Gag me.

Even if these people (Hans Urs von Balthasar and Edward M. Kennedy) are indeed in heaven -- and I sincerely hope that they are -- people who are famous principally for flouting the teachings of the Church should not be raised to the honors of the altar without a thorough investigation.

It's astounding how much Balthasar dominates the Catholic classroom. Priests who graduated from the local seminary said it was possible to make it through the entire four years of theology without ever once cracking the Summa, but it was all Balthasar all the time.

Balthazar's strength is that he is Rahner by another name. By positioning himself as "Rome's Man" against the teutonic invader, he won the hearts of many a churchman (who says there's no politics among theologians? No one with any common sense), and concealed the fact that, when all is said and done, there wasn't that much difference between them. Well, except for a whole lot of crypto-theosophical hokum mixed up in von B's stage-managing of the lovely and talented von S. The bland Rahner simply had no vaudvillian sense.

If only the Church had paid no attention to the man behind the curtain!

"In the tradition of Teresa of Avila and Simone Weil"


You know, THAT tradition!