Day of infamy, day of grace 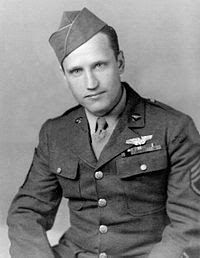 During my high school years at a mission boarding school in Tokyo, one of my dorm mates was the son of Jacob DeShazer (1912-2008) (pictured right), one of the intrepid Doolittle airmen in the daring carrier-launched bombing raid on Japan four months after Pearl Harbor. Like many of the sixteen B-25 Mitchell bombers, DeShazer's ran out of fuel after dropping its payload in Japan and the crew had to bail out over the enemy-occupied coast of China.

Captured by the Japanese, DeShazer was sent to Tokyo with the survivors of another Doolittle crew, and was held in a series of P.O.W. camps both in Japan and China for 40 months -- 34 of them in solitary confinement. He was severely beaten and malnourished. Three of the crew were executed by a firing squad. Another died of slow starvation. DeShazer's sentence was commuted to life imprisonment by the Japanese emperor. Along with the surviving Doolittle POW's, DeShazer was liberated by American paratroopers in China in 1945.

But the story doesn't end there. As the result of a religious conversion during his internment as a prisoner of war, DeShazer resolved to become a missionary after the war and returned to Japan in 1948. Two years later, an American missionary was passing out evangelistic tracts outside a commuter train station in Tokyo, and among those who picked up a tract written by DeShazer (entitled "I Was a Prisoner of War in Japan") was former Captain Mitsuo Fuchida (pictured left), the Japanese airman who led the carrier-launched attack on Pearl Harbor several years earlier on December 7, 1941. Fuchida converted to Christ as a result of reading DeShazer's story and eventually met DeShazer.

Thus Jacob DeShazer, the Doolittle raider who bombed Japan, met Captain Mitsuo Fuchida, who led the attack on Pearl Harbor, and the two became good friends and even cooperated in common mission ventures in Japan.

Fuchida and DeShazer together in Japan
In 1959, DeShazer moved to Nagoya to establish a Christian church in the city he had bombed. Fuchida became a Christian evangelist, traveling across Japan and Asia telling his story: "I would give anything to retract my actions of twenty-nine years ago at Pearl Harbor, but it is impossible," he wrote. "Instead, I now work at striking the death-blow to the basic hatred which infests the human heart and causes such tragedies. And that hatred cannot be uprooted without assistance from Jesus Christ."

Some years later, Fuchida came to visit the Hokkaido International School in Sapporo, Japan, where I was enrolled as a junior high student. He was accompanied by an American (whose name I cannot remember) who was promoting the film, Tora! Tora! Tora!

Fuchida spoke to the assembled students, telling his story, along with the American, who told us about the soon-to-be-released film, Tora! Tora! Tora! -- still the best Pearl Harbor film, in my opinion. A memento I still have in my possession from that event is the framed autograph of Captain Mitsuo Fichida, signed on a piece of notebook paper.

Some might wish to discard or even destroy such a relic from someone who was not only involved in that day of infamy, but led the assault that left over 2000 Americans dead in Honolulu, Hawaii. I keep it as a memento of God's grace which He pours out in the most unexpected ways in the seemingly most unlikely hearts.

Related
Posted by Pertinacious Papist at 10:05 AM
Email ThisBlogThis!Share to TwitterShare to FacebookShare to Pinterest
Labels: History, Inspiration, People

Glad you liked it, JFM. Every time I reflect on those events, I think the same. Thanks. PP