Into the long silence ... 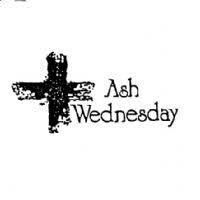 The name dies cinerum (day of ashes) which it bears in the Roman Missal is found in the earliest existing copies of the Gregorian Sacramentary and probably dates from at least the eighth century. On this day all the faithful according to ancient custom are exhorted to approach the altar before the beginning of Mass, and there the priest, dipping his thumb into ashes previously blessed, marks the forehead -- or in case of clerics upon the place of the tonsure -- of each the sign of the cross, saying the words: "Remember man that thou art dust and unto dust thou shalt return." The ashes used in this ceremony are made by burning the remains of the palms blessed on the Palm Sunday of the previous year. In the blessing of the ashes four prayers are used, all of them ancient. The ashes are sprinkled with holy water and fumigated with incense. The celebrant himself, be he bishop or cardinal, receives, either standing or seated, the ashes from some other priest, usually the highest in dignity of those present. In earlier ages a penitential procession often followed the rite of the distribution of the ashes, but this is not now prescribed.

The Teutonic word Lent, which we employ to denote the forty days' fast preceding Easter, originally meant no more than the spring season. Still it has been used from the Anglo-Saxon period to translate the more significant Latin term quadragesima (French carême, Italian quaresima, Spanish cuaresma), meaning the "forty days", or more literally the "fortieth day."

Posted by Pertinacious Papist at 8:38 AM
Email ThisBlogThis!Share to TwitterShare to FacebookShare to Pinterest
Labels: Catholic practices, Liturgical seasons