I love my German Shepherd 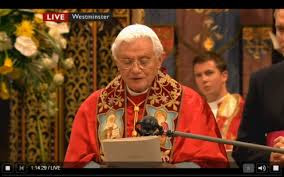 From a reader's email:

Francis Phillips in the Catholic Herald, writes of the Pope's visit in England, and sees "the Rev Ian Paisley as he used to be known, gripping some railings and looking discomposed in his belligerent Belfast fashion. Someone once told me that the Rev used to refer to the then incumbent of the chair of St Peter as 'Old Red Socks.' I don’t know whether this is true or not, but I wonder what he made of Pope Benedict’s footwear."

... Earlier, Australia's traddie Christian Order complained in strictly Roman terms of "the impossibly fuzzy mixture of orthodox, heterodox and heretical ideas found in some neo-conservative works today [that] clearly owes much to the filtering down of Cardinal Ratzinger’s more progressive ideas, promoted through his numerous books, as explained in the Larson series."

Joseph Ratzinger does manage to ... sometimes surpass his compadres like De Lubac, Rahner, and von Balthasar for verbose, opaque fuzziness. Or at least he has in the past. Despite all the absolutely ludicrous talk of God's Rottweiler. (We might as well talk of Obama's essential conservatism).

But read the [Catechism of the Catholic Church], read his homilies, and listen to him as Pope. It is a glorious, and amazing, experience to witness Truth defended in the modern age. And who, really, would have suspected that from one of the starry-eyed architects of Vatican II? Really?!

So, when my Evangelical friends bewilderedly ask me how on earth I can be Catholic, I think maybe I ought to point first to the might-as-well be gay Rowan Williams, and then the might as well be Nancy Pelosi, Brian McLaren. Or the churches everywhere that really are simply Young Life for adults. And THEN point to a shy, 20th century German theologian, who says things like this:

Fidelity to the word of God, precisely because it is a true word, demands of us an obedience which leads us together to a deeper understanding of the Lord’s will, an obedience which must be free of intellectual conformism or facile accommodation to the spirit of the age. This is the word of encouragement which I wish to leave with you this evening, and I do so in fidelity to my ministry as the Bishop of Rome and the Successor of Saint Peter, charged with a particular care for the unity of Christ’s flock.

Really and truly, what but divine providence can account for such words being spoken by a man shared secrets with Hans Küng at Vatican II, has been perpetually buffeted by the liberal and cultural faux Catholicism that defines the Vatican, came out of a liberal German university, and apparently just wants to be a nice guy, liked by everyone and his cats? We have all the likely heroes crumbling, and the soft-spoken, Euro Vaticanista who should love all the clerical sellouts towing the inescapable orthodox line. Even when mauled by the intimidating universal Media presence.

A miracle. And a testimony to the truth on the unlikely claim of Petrine succession.

For which I say Praise The Lord.

"Poetry, when it is fully itself, enacts something of the cross and resurrection, abandoning its fluencies and successes in order to press further and further towards that 'thin' texture through which truth may perhaps come. Poets, like Prospero at the end of The Tempest, have to know when to drown their books, when to let go of the defences of rhetoric and the illusions of fully controlling what they say. Milton trusted language perhaps more than most poets and polemicists, and much could be said about the cost of his 'letting-go', both personally and poetically. It is hard to guess just how much he was enabled to confront it by a faith that insists that abandonment, and an undressed, unforced language is God's own idiom for making himself known: the word of the cross, as St Paul calls it. God saves not by heroic acts – not through a Samson – but by being who he is: by a human life and death that simply fleshes out God's own fidelity to himself - 'whatever place,/Habit, or state, or motion, still expressing/ The Son of God'.

The poet cannot finally avoid the summons from confident speech to the brokenness and harsh linguistic economy of witness; the disciple cannot avoid the summons from heroism to silent fidelity, knowing only that this has been God's way of transforming the world. 'If we have died with Christ, we believe that we will also live with him'. Milton, poet and disciple, faces this as reluctantly as any great or heroic figure ever did. Yet face it he does – patchily and reluctantly, but truthfully; and so must we." Rowan Williams, sermon on Milton.

Guess which is which.

"...silent fidelity"? Typical Rowan Williams newspeak, tainted with the opaque inanity of modern Communication Studies. Which underscores just why Anglicanism now falters. "Silent fidelity"? Given the reams of words the AOC has issued over the past decade, his own witness can hardly be described as either. The miracle of this Pope, copversely, is that while over his career he has seemed partly partial to fare like that sauteed by Williams, in the Chair of Peter he still takes it upon himself to audibly SPEAK the clear Truth even when it divides. The "harsh linguistic economy of language" would be that mode God chose for Inspiration, and that gift He has assigned us for the ongoing propagation of faith. And as the CCC attests, even when not inspired the verbal code works perfectly well to convey Truth. Language is adequate. Rowan Williams, not quite. Words to the contrary are easily understood as disingenuous at best.

And how apt that after typing those words I see this link, picture, and ever-so-appropriate picture!