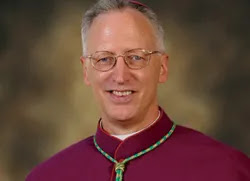 In a move consistent with His Excellency’s previous support of the Traditional Latin Mass, Diocese of Lansing Bishop Earl Boyea has established a new Extraordinary Form Mass Community in the city of Lansing, Michigan. To be called the Blessed John XXIII Community, the group will begin to hold Masses this fall in the lower level of St. Mary Cathedral in Lansing, pictured below. The news was significant enough to garner an article in the August 10, 2010 edition of the Jackson Citizen Patriot newspaper.

Several months ago, Bishop Boyea asked Fr. Jeffrey Robideau to start assessing interest in such a community. Until a few years ago, Fr. Robideau had been pastor of St. Joseph Church in Jackson and a regular celebrant of the Tridentine Mass held in that church. Jackson and Flint have so far been the only two sites of Extraordinary Form Masses in the Lansing diocese, both of which are quite a distance from Lansing.

Approximately 60 people attended the planning meetings and committed to attending a Lansing Latin Mass Community. Bishop Boyea recently asked Fr. Robideau to expand his role and be the chaplain of the community, certainly logical in light of Fr. Robideau’s experience with the Tridentine Mass in Jackson.

Not only is this significant news in and of itself, there is an interesting sidebar to this effort: Should there be sufficient attendance and financial support – far from guaranteed, we might add – there is a possibility that the Blessed John XXIII Community could evolve into the first full Tridentine Mass parish in Michigan.

In Canada and the U.S., there are several Extraordinary Form parishes. All but a handful are administered by priests from the Fraternity of St. Peter and the Institute of Christ the King, the GM and Ford of priestly associations devoted to the Traditional Liturgy. Only Mater Ecclésiæ Parish in Berlin, New Jersey and perhaps one or two others are run by diocesan clergy. While it is pure speculation at this point, it is not inconceivable that the Lansing operation might become one of this rare breed, a fully Tridentine Mass parish staffed by diocesan priests.

We commend Bishop Boyea for taking this initiative, and ask our readers to pray for His Excellency and for Fr. Robideau. For further information about the Blessed John XXIII Community, see Fr. Robideau’s web site: www.getholy.com

Speaking of Bishop Boyea, he will be celebrating two Holy Masses in the Extraordinary Form on the same day, Sunday, October 10. The first will be at 11:00 AM in Lansing’s St. Mary Cathedral’s lower level chapel, to formally open the Blessed John XXIII Community. The second will be at 4:00 PM at All Saints Church in Flint, to mark the anniversary of the Flint Tridentine Mass.

Jason Grossi, the member of Windsor’s Assumption Church’s Tridentine Mass Community who has been named lead architect for the church’s $9,800,000 restoration, has begun writing a column explaining progress on the project. The column appears in the monthly Assumption Heritage Trust Foundation newsletter, which is available at the entrances to Assumption Church. The newsletters have not (yet) been posted on-line, however we will notify you if they are.

This is not a typical renovation project. Matters of historical significance must be taken into account at many stages. The Ontario Heritage Trust, which must approve construction at historic sites, has to be consulted. Jason’s trips to Toronto to meet with the OHT, as well as local historic research, are documented in his columns.

While we are on the subject, you are always welcome to visit the sacristy at any of our churches. This might be interesting for children as well as for yourself. You can see the myriad of vestments and supplies that are used for various liturgies throughout the year. Please see the priest or one of the altar servers after Mass.

n addition to the below, High Masses are held every Sunday at St. Josaphat at 9:30 AM and at Assumption in Windsor at 2:00 PM, and on Fourth Sundays at St. Joseph Church at Noon.

[Comments? Please e-mail tridnews@stjosaphatchurch.org. Previous columns are available at www.stjosaphatchurch.org. This edition of Tridentine Community News, with minor editions, is from the St. Josaphat bulletin insert for August 22, 2010. Hat tip to A.B.]
Posted by Pertinacious Papist at 8:42 AM
Email ThisBlogThis!Share to TwitterShare to FacebookShare to Pinterest
Labels: Church architecture, Liturgy, News

Be careful! Fr. R. hasn't been at St. Joseph for quite awhile now. He's been at another church in Jackson. While he started out pretty good, he changed when he got St. Joe's as a pastor. He thinks that if you don't think Vatican is good with positiveness coming out of it, you are a schismatic and heretic. Trust me. I've had many e-mails to this effect. Also, he doesn't know Latin. When he gets to the Canon, he does fine. Other than that, forget it. All I'm saying is, "Be careful"! contact me at my e-mail if you want. Jon

Referring to the Fraternity and the Institute as the GM and Ford of, gosh, ANYTHING, is insulting to these two fine orders. Neither is bankrupt, neither took money from Mr. Obama to prop up its failing structure. Perhaps in another era the metaphor would have been apt. These two fine groups have been the lifeblood of the traditional Catholic movement.

That said, I would like to put in a plug for finding ways to help the diocesan clergy catch the bug. The Traditional Latin Mass and the spirituality which accompanies it is, well, infectious. Come! Catch the cure to what ails a modern world!

Chris:
What sickens the modern world especially the Catholic world is both priests and lay people alike don't put into practice what Jesus gave us as the most important commandments, Love God and love neighbor. These commandments fall most weightily on priests. When you are given much, much more will be expected. If our priests cannot simply be kind then maybe they are not called to be priests. We need quality priests not quantity. Stop worrying about the sails of the ship not being full and plug the hole, the ship is taking on water and sinking.

I'm not sure if you and I agree or disagree. Both the Fraternity and the Institute have a bumper crop of vocations. The entire motivation for both to exist is to allow a fuller flowering of love of God and neighbor.

While I'm quite sure that Father Corapi would agree with your complaint against the Catholic world, he would do so precisely because we ARE Catholic. I don't see a problem agreeing with you, unless you mean that Catholics, especially traditional ones, lack both love of God and love of neighbor. To assert something like this is to fly in the face of the lived reality of traditional expressions of the faith.

I know Fr. Robideau and he's a Saint. You people are certainly heretics and God-haters if you speak ill of him, for he is staunchly anti-homosexuality, pro-reverence, and pro-Jesus. Please, no one be fooled by these liars. When they leave their keyboards, they will feast on aborted babies, warm themselves on a fire fed by the Revelations of St. Bridget. They calumny and their souls tap-dance into Hell. Follow them not. Fr. Robideau is a wonderful man, a Man of God, a Saint, and one of the few non-heretical, truth-teaching priests in the USA, the greatest nation on earth.