The Rite of Exorcism

"As a layperson, the first thing that surprised me about exorcism was that not many priests knew anything about it, especially not American priests." 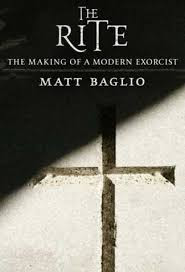 In the fall of 2005, Matt Baglio, the author of The Rite: The Making of a Modern Exorcist

(New York: Doubleday, 2009), was a journalist associated with the Rome bureau of the Associated Press living in Italy when he heard that a Vatican-affiliated university was offering a course entitled "Exorcism and the Prayer of Liberation." He thought it might be a PR stunt. "Did the Church still believe in exorcism?" he asked himself. Not knowing what to expect, he decided to go to the class, viewing it as a rare opportunity: "I thought there was at least an article in it." Little did he know that the envisioned article would turn into a book.

The first day of the course, changed all of his preconceptions about exorcism, largely formed by sensationalist Hollywood depictions. "Not only was the ultramodern classroom an odd setting to see priests, Franciscan friars, and nuns of various orders listening to lectures on the powers of Satan, but, to my surprise, I found the students themselves to be anything but the 'superstitious' or puritanical priests portrayed in popular culture." (p. 235)

One of the most unexpected things about exorcisms as described here is that they aren't typically a one-time deal. More often than not, they resemble a periodic scheduled visit to one's therapist, with the exorcist scheduling their next visit in his appointment book at the conclusion of a session. The vast majority of exorcisms might strike an observer as monotonous affairs. This isn't to say that there aren't occasionally the unexpectedly violent and convulsive confrontations one might expect, but that these are not typically conclusive. A well-known case in Rome reportedly took over 40 years.

Another surprising thing is the disparity in the number of exorcists and workload profiles between various countries. As of the writing of this book, Germany reportedly has no exorcists, the United States 14, and Italy somewhere upwards of 400. "According to the Association of Italian Catholic Psychiatrists and Psychologists, in Italy alone, more than 500,000 people see an exorcist annually." (p. 6)

As a layperson, the first thing that surprised me about exorcism was that not many priests knew anything about it, especially not American priests....

My first behind-the-scenes look at exorcism occurred when I began to interview the various exorcists on their "home turf." Here and there I would catch a glimpse of what existed on the other side -- a group of people hounding Father Tommaso outside the sacristy of the Scala Santa; Father Bamonte wiping a puddle of holy water off a chair so that I could sit down for an interview; sitting in Father Carmine's waiting room while a woman screamed and banged around in his office. Perhaps most surprising was that far from being carried out in some hilltop monastery, many of the exorcisms were performed in churches located right in the heart of Rome. In fact, it was common to be talking to an exorcist while groups of tourists paraded around taking photos of religious iconography. One bizarre aspect of researching this book was this juxtaposition of two worlds -- talking to a victim of demonic possession or hearing an exorcism and then emerging into the bright sunshine and chaotic streets of Rome.

Each exorcist I interviewed was compelling in his own right.... I also found their candor to be refreshing. Many of the books I'd read had ordered everything into neat little boxes, yet here were exorcists with years of experience telling me that there were still things that couldn't be known.

Then there were the victims. Like Father Gary, not only did I find their apparent normalcy surprising, but I also found them credible, even likable people These were not people who struck me a trying to pull a fast one; they were sincere, heartfelt individuals who were struggling with something even they seemed at a loss to understand. Later, when I participated in exorcisms, this impression was only reinforced.

Many people assume that an exorcist is out to prove that people are possessed; however, with each of the Italian exorcists I talked to, I found the opposite to be true. It is also wrong, I think, to assume that the Church is on one side promoting the belief in spirits while the secular world is on the other, trying to debunk such notions. Stroll down to the local New Age bookshop to see the tremendous popularity of angels, "channeling," and "astral travel," not to mention thenumber of "ghost whisperers" and therapists who practice "spirit releasement." (pp. 236-238)

The Italian exorcists interviewed in Baglio's book are at pains to rule out psychological disorders before proceeding with exorcisms. Following suit, Fr. Gary Thomas, the American priest from San Francisco whose training in Rome is the principal subject of Baglio's book, promotes the importance of erring on the side of caution by assembling teams of medical doctors and psychologists or psychiatrists who could fully vet potential "patients" before proceeding to exorcism, and recommends making this a matter of standard national policy once the USCCB can be made to take the issue seriously enough to address it. (pp. 211ff.)