The place of conversion in evangelization

In the Fall 2007 issue of the Fellowship of Catholic Scholars Quarterly, Kenneth D. Whitehead reviews Good News, Bad News: Evangelization, Conversion and the Crisis of Faith

This short but very readable and interesting book covers the always current question of conversion to the Catholic Faith -- a subject of particular interest today, perhaps, because of what the subtitle of this book calls "the crisis of faith." In today's world of galloping secularism, the faith is supposed to be more and more out-moded and irrelevant; and, indeed, large numbers of those who once adhered to it have now evidently abandoned it.

(Oriens, 2003) is any indication, include large numbers of self-identified Catholics whose beliefs and morals are virtually indistinguishable from those of the secular world around them but are as likely as not to be indignantly taken aback if anyone should ever attempt to call them on it. Yet, the Catholic Faith remains true, the Catholic Church remains "the teacher of truth," as Vatican II affirmed (Dignitatis Humanae 14), and the top priority recent popes turns out to be the very thing mentioned in the subtitle of this book, namely, "evangelization." Whitehead writes:

The main purpose of Vatican Council II convoked by Blessed John XXIII ... was supposed to be nothing else but to equip the Church to bring the truths of the Church to bring the truths of the Catholic faith more effectively before the world. It was even thought at the time of the Council -- naively, as it turned out -- that the Catholic Church was on the verge of gaining large numbers of new adherents through the embrace of ecumenism. What instead became a virtual new era of dissent from, and disaffection with, Catholic truth was not at all foreseen. Sober experience has taught us since then, however, that evangelization is more likely to be brought about -- even in the expanding new Churches in Africa and Asia -- by the very old tried and true method of individual conversion than by any mass adherence to or amalgamation with the Church on the part of those outside her visible boundaries.

Conversion, of course, is primarily what this book is about. 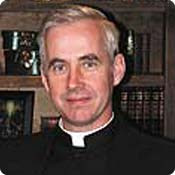 One of it authors, Father C. John McCloskey, is a priest of the Prelature of Opus Dei, whom I had the privilege of meeting at Opus Dei's Catholic Information Center in Washington, DC, during a January 22nd March for Life several years ago. As Whitehead points out, while Fr. McCloskey would be the last person to claim credit for what only divine grace can effect, he is nevertheless well known today for having guided numerous converts into the Catholic Church, including such prominent figures as ex-abortionist Dr. Bernard Nathanson, economist and pundit Lawrence Kudlow, Kansas Senator Sam Brownback, talk-radio personality Laura Ingraham, Publisher Alfred Regnery, and syndicated columnist Robert Novak. Those who know Fr. McCloskey know that he is a winsome and forthright person who often just simply comes out and asks people, as he does in this book, "Have you ever thought of becoming a Catholic?"

I know there have been some concerns among long-time readers of this blog about Catholic converts who have come into the Church inadequately prepared in various ways -- who may import basic (often various Protestant) misapprehensions about Christianity into their lives as Catholics, who may not be prepared for the level of dissonance they may encounter on the parish level when they arrive, who may end up in some cases leaving the Church and reverting to their erstwhile non-Catholic affiliations, etc. These are certainly legitimate concerns that I share, as our past posts on protestant reverts and cases such as that of Bill Cork illustrate.

Having said that, I would agree with Whitehead when he says that sober experience has taught us since Vatican II that evangelization is more likely to be brought about by the very old tried and true method of individual conversion than by any sort of mass cultural movement or amalgamation with the Church on the part of those outside her visible boundaries. Conversion is the inextricable heart of the evangelization that regularly figures among the highest priorities of our recent popes at the head of Christ's Church. That the subject is laid out in so orderly a fashion here, Whitehead suggests, is likely owed to the organizational gifts of co-author, Russell Shaw.

Of related interest:
Posted by Pertinacious Papist at 6:52 PM
Email ThisBlogThis!Share to TwitterShare to FacebookShare to Pinterest
Labels: Converts, Evangelization