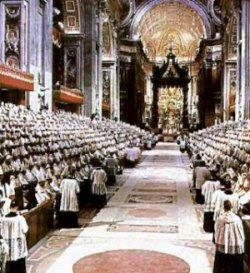 by permission of the publisher in Musings of a Pertinacious Papist, August 31, 2005]. I concur with what Lamont understands as the necessary reason for Vatican II's teachings. I was impressed with how well he dealt with the "external" and "internal" issues in such a short article. Nevertheless, I would like to add some counterbalancing ideas to Lamont's thesis.

Normally, I associate with the traditionalist side of the post-conciliar debates, yet, at the same time, I often part company with my colleagues on Vatican II, for as Lamont says, traditionalists either dismiss it altogether or they find egregious fault with its teachings, unwilling to reconcile its seeming innovations with tradition.

Barring its minefield of deliberately placed ambiguous statements (a "deliberateness" freely admitted by attendee Eduard Schillebeeckx [pictured left]), we must accept Vatican II as a legitimate ecumenical council, without dogmatic error, and designed for the good of the Church. In reality, 95 percent of its words are unproblematic. If the other five percent is interpreted in the light of tradition rather than liberalism and neo-Modernism, we shouldn't have too much problem ironing out any difficulties. The sooner traditionalists accept that challenge, the faster our divergent camps can move onward in cleaning up the mess of the post-conciliar church -- and it is, indeed, a mess.

There are a few points, however, that Lamont needs to consider. First, although he enlightened us to the problem of nominalism stemming from Occam (a philosophy which eventually leads people into the trap of Phariseeism, wherein one obeys law for law's sake rather than from true love for God and man), we must never forget that man has a grave sin problem; and this sin problem became especially acute in the 20th century. Law is an absolute necessity in such times, for it binds men to obedience and maintains an orderly and civil society. Although we may all strive to reach the ideal of altruistic love, it cannot be denied that we desperately need law to keep the lid on society's potential debauchery. One day we hope that obedience will mature us to the point of obeying strictly for love's sake (Jas. 2:8-13), but until that day comes, we must face the reality of our own wretchedness.

In this light, one of Vatican II's major problems was that its message of altruistic love and spiritual freedom was being given to a society on the verge of cutting loose most of its social mores. Just when we needed a strong hand to remind us of our moral obligations in the midst of a world gone crazy with the lust for power (e.g., World Wars I and II), and a world either contemplating or actually indulging in some of its worst sins (e.g., contraception, abortion, divorce, promiscuity, homosexuality), the prelates of Vatican II more or less forgot why the traditional Church, through her regimen of strong laws and purifying disciplines, insisted on keeping tight reins on her people. They knew the time-honored truth of what was deep in the heart of man. As Jeremiah says, "The heart is deceitful above all things, and desperately curupt; who can understand it?" (17:9).

Instead, Vatican II's engineers were working on the novel principle that 20th-century man was so much more socially mature and scientifically advanced than his medieval predecessor that he need not hamper himself with restrictive laws and humbling disciplines any longer. He had "come of age," as they say, enlightened by the arts and sciences to such a degree that it was thought that he would never again succumb to the barbarism of the past. The sad fact is, as soon as Vatican II's message of altruism and freedom sailed past its doors, bishops, priests, nuns, and layfolk, still embattled by their own concupiscence, sorely abused that freedom and multiplied their sins a hundredfold. One of its salient effects (among many others), was the worst sex scandal ever to rock the Church in her 2,000-year history, complete with pre-meditation and cover-up.

Am I saying that we should shun the message of love and freedom? No, not at all; but love and freedom cannot be dumped on sinful human beings without a good measure of law to keep them in order, until, if, and when they reach an acceptable plateau of virtue. A balance must be struck between law and love, and this, Vatican II, or at least its post-conciliar teachers, did not facilitate. The irony is, we had just experienced the most savage and destructive periods the world had ever known (e.g., World Wars I and II), yet just a dozon or so years later, high-placed prelates were advocating the position that 20th-century man was much more civilized than his medieval counterpart and deserved a breath of fresh air. How wrong they were.

Case in point: Pope John XXIII (who, as Cardinal Roncalli, was on Pius XII's list of "Modernist" prelates with whom he had grave concerns), initiated the movement toward convening Vatican II in 1958, yet at the same time, after reading the ominous portents of the Third Secret of Fatima, Pope John declined to reveal them to the world in 1960, the date requested by our Lady. In his obstinance, the Pope went so far as to declare Fatima advocates "prophets of doom," who carried a message "not meant for this pontificate." Consequently, while our Lady was trying to warn us that the Church was being bombarded, both within and without, by unparalleled wickedness, John XXIII made it seem as though we were on the verge of a utopian Christianity. The messages couldn't have been more polar. This is why liberalism will never work on this earth. Its utopian ideals ignore the fact that deep within man there is a sin problem that simply won't go away by wishful thinking. 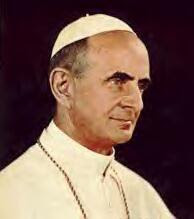 Now, my criticism of John XXIII should not receive too many objections from Lamont, not only because the information is factual, but because in his carticle Lamont saw no problem putting the next pope, Paul VI, at direct odds with his own Church. What's good for the goose is good for the gander. Lamont's target was Paul VI's Novus Ordo Missae, an innovation, he believes, that was not even on Vatican II's radar screen, and thus he chastises Pope Paul for distorting or ignoring the document Sacrosanctum Concilium.

So it is certainly no stretch of the imagination to posit that John XXIII was also a problem in the mix, albeit an instigating one. Essentially, the only thing Lamont accomplishes in his article is a shifting of the burden of guilt from the Council to the Pope, but in either case the responsibility remains with an entity at the very pinnacle of the hierarchical pyramid for the post-conciliar mishpas we experience today.

If in Lamont's mind Paul VI could move against his own Council and, in fact, interpreted it so abusively that he produces the Novus Ordo monster, then he must add to his thesis that other popes may have done the same with Vatican II.

In that light, we might present John Paul II as another candidate. Where in the documents of Vatican II, for example, does it teach that the Church is to call all the religions of the world together and encourage them to pray to their own gods for mundane favors; and where does it teach that we are to then send thse pagans home to their various countries without ever preaching the Gospel of salvation to them, as happened under John Paul II's watch at Assisi 1986 and again 16 years later at Assisi 2002?

Vatican II's documents have no such stipulations. The Council mentions "prayer" over 200 times, but not once does it suggest we are to encourage pagans to pray to their own gods, and the tradition prior to Vatican II certainly makes no such suggestion. In fact, the only time Vatican II allows Catholics to pray with non-Catholics is when Unitatis Redintegratio (#8) says that Catholics can pray with "separated brethren," but even in this case it is limited to the "goal of unity," that is, as Vatican II teaches elsewhere, with the purpose of bringing the Protestant back to the Catholic Church. In addition, Lumen Gentium (#16) requires that the Gospel of salvation (and damnation) be preached to pagans whenever the opportunity arises, citing St. Paul's dealings with the Athenians of Acts 17 as our abiding paradigm. Assisi I and II ignored all this. Its pagan participants are now living in their respective countries thinking that praying to their false gods is now sanctioned by the Catholic Church and that they can be saved in their own religions.

Let me add another example. Although Lamont is correct in saying that Nostra Aetate garnered more respect for the Jewish people and did its best to condemn attitudes of anti-Semitism (and rightly so), where did Nostra Aetate state that "The Old Covenant ... has never been revoked" (John Paul II, 1980); or where does Nostra Aetate apologize for "anti-Semitic passages in the New testament" or say that "the Jewish wait for the Messiah is not in vain" (Pontifical Biblical Commission under Cardinal Ratzinger, 2001); or where does it say "the Church believes that Judaism, i.e., the faithful response of the Jewish people to God's irrevocable covenant, is salvific for them" (Cardinal Kasper, 2001); or that "To proselytize [Jews] is not an attitude of love, nor is it one of knowledge!" (Cardinal Willebrands, 1992); or where does it say that "campaigns that target Jews for conversion to Christianity are no longer theologically acceptable in the Catholic Church" (Cardinal Keeler, 2002)? Nostra Aetate never said anything close to these outlandish claims concerning the Jewish people. Obviously, then, these are just more evidence to prove Lamont's thesis -- that popes and prelates themselves can exaggerate or misreprsent conciliar documents.

In the end, Lamont has, shall we say, opened up a can of worms by pitting Paul VI against his own Council, and they are worms which any traditionalist worth his salt will not hesitate to use as bait for his conservative rival. Vatican II may serve as a point of conciliation for conservatives and traditionalists like myself, but we cannot hide from the fact that at least three popes and their underlings, who both argued for Vatican II's necessity and interpreted its teachings, obviously made grand detours from its original meanings and intent. That seems to be the pressing problem, not so much Vatican II.

What we need is a pope who will bring us back to the original meaning of Vatican II, something that has not been successfully performed for the past forty years. My hope and prayer is the Benedict XVI will lead the way in this much-needed reform.

[Robert Sungenis is President of Catholic Apologetics International. Among his books are Not by Faith Alone: A Biblical Study of the Catholic Doctrine of Justification

, Not by Bread Alone: The Biblical and Historical Evidence of the Eucharistic Sacrifice

, Not by Scripture Alone: A Catholic Critique of the Protestant Doctrine of Sola Scriptura

, and How Can I Get to Heaven?: The Bible's Teaching on Salvation-Made Easy to Understand

. His article, "Grand Detours From the Second Vatican Council," was first published in the New Oxford Review (October 2005), pp. 18-21, and is reprinted here with permission from New Oxford Review, 1069 Kains Ave., Berkeley CA 94706, U.S.A.]
Posted by Pertinacious Papist at 10:10 AM
Email ThisBlogThis!Share to TwitterShare to FacebookShare to Pinterest